After shining as the Woman of the year on the cover of GQ, Radhika Apte yet again gets honoured as the Woman of the year by Vogue's latest edition. The talented actress has taken the film industry by storm with her back to back successes this year. Right from creating a mark with her first film this year to dominating the digital platform, Radhika Apte has ruled the year across platforms. 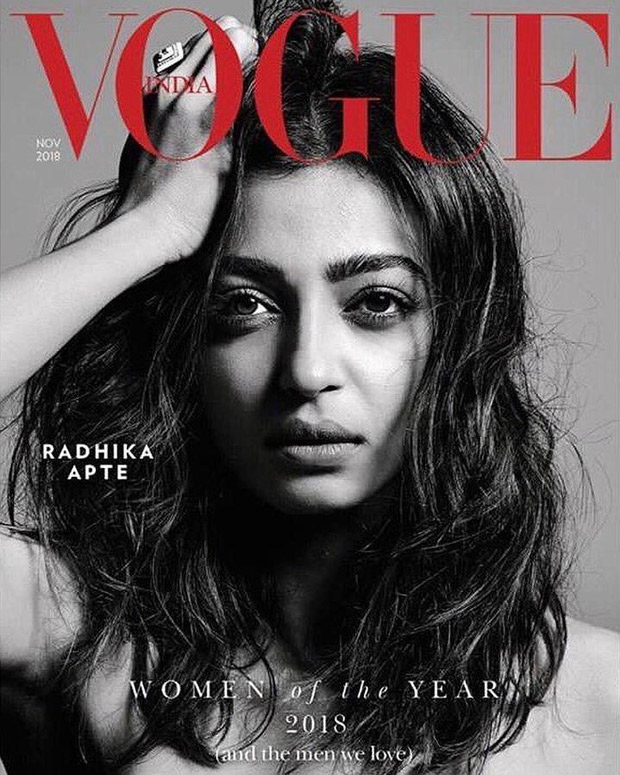 Celebrating the achievements of the actress, earlier GQ awarded Radhika Apte as the woman of the year at GQ Men of the year awards. The actress also graced the magazine cover with the same tagline.

Now, Vogue too featured Radhika Apte as the woman of the year with their latest edition. The magazine took to social media to share, "From playing the part of a determined RAW Agent in Sacred Games to a heartbroken lover in Andhadhun, 2018 has been an exciting year for Radhika Apte whose versatile acting talents have gone unnoticed by none. Meet the change makers, the ceiling breakers and the entertainers of the year on the cover of November 2018 issue! Photographed by: Bikramjit Bose (@thebadlydrawnboy). Styled by Anaita Shroff Adajania (@anaitashroffadajania). Hair: Yianni Tsapatori (@yiannitsapatori). Make-up: Namrata Soni (@namratasoni ) (Faye; Radhika)".

It has been a great year for Radhika Apte with the consecutive successes of her various projects from Padman to Andhadhun and the recently released Baazaar.

Radhika has carved a place for herself in not just the Indian film industry but also the digital streaming space. The actress' last outings Sacred Games, Lust Stories and Ghoul a lot of critical acclaim and love from her viewers.

Recently, Radhika was seen at TIFF 18 with Dev Patel for The Wedding Guest, which stars British actor Dev Patel in the leading role with her The film, written and directed by Michael Winterbottom, premiered at Toronto International Film Festival 2018.

Radhika Apte has an interesting line up of projects ahead with Hollywood outing alongside Dev Patel in The Wedding Guests.

Also Read: Slay or Nay - Radhika Apte in Lola by Suman for the Daniel Wellington event