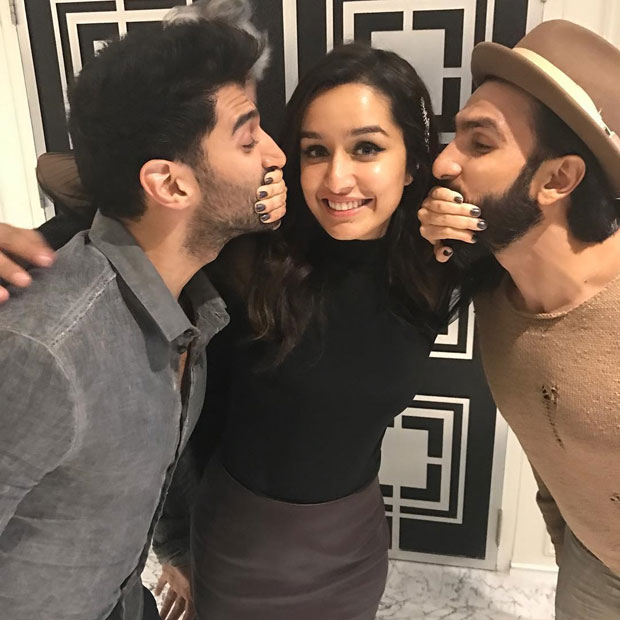 Recently, during a special screening of OK Jaanu (which happened last night), when Aditya Roy Kapur and Ranveer Singh were about to ‘kiss’, they were stopped by none other than the film’s heroine Shraddha Kapoor. Before you run your imaginations wild, let us assure you that, all of this was done in a funny intention!

Karan Johar, who happens to be one of the producers of OK Jaanu, unleashed the naughtiness in him when he posted the adjoining photograph on his social media. Readers may note that the person who is responsible for clicking the photograph is none other than Karan Johar himself! Karan Johar captioned the photograph as “Jaanus in the house!!!! #okjaanu #tomorrow #fridaythe13th”. Ranveer Singh, who is mostly known for his ‘out-of-the-box’ actions, tried to plant a kiss on OK Jaanu’s hero Aditya Roy Kapur, who was also apparently game for the same. This was till the time… Shraddha Kapoor came in between them and stopped them from doing so!

The special screening of OK Jaanu was attended by many of the Bollywood celebs like Malaika Arora Khan, Ranveer Singh, Alia Bhatt, Sidharth Malhotra, Kriti Sanon, Varun Dhawan, and Aditi Rao Hydari amongst others.

OK Jaanu, which happens to be a remake of Mani Ratnam’s Tamil film OK Kanmani, is all set to release tomorrow. Besides Aditya Roy Kapur and Shraddha Kapoor, OK Jaanu also stars Leela Samson, Naseeruddin Shah and Karan Nath in prominent roles. OK Jaanu is being directed by Shaad Ali, who returns to direction after Kill Dil, which was released in 2014 and starred Govinda, Ranveer Singh, Ali Zafar and Parineeti Chopra.