In 1989 and early 1990, the Hindus of the Kashmiri valley were forced to flee the valley after they were targeted by militants. According to reports, approximately the number of Hindus living in the Kashmir Valley has come down from 300000 to 600000 in 21990 to 2000-3000 in 2016. According to the Government reports, several Kashmiris who fled from their state had registered themselves as refugees in their own country, Vidhu Vinod Chopra’s film Shikara also traces the same journey. 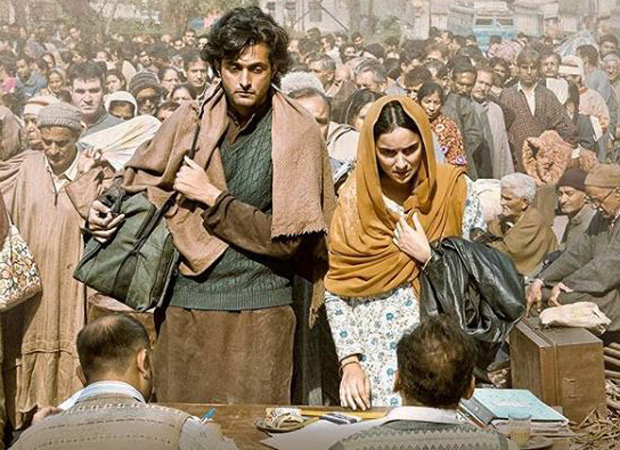 The trailer stars Aadil Khan as Shiv Kumar Dhar and Sadia as Shanti Dhar, giving us the layers of blooming romance in the conflict-ridden state of Kashmir of the year 1990. The film is filmmaker Vidhu Vinod Chopra’s tribute to his mother and was launched at an event in Mumbai today.

The trailer of the film begins with Shiv and Shanti, a couple in their abode where just in a moment, the discomfort starts to brew. The violence erupts on 19 January 1990, as the director brings the story to us around Kashmiri pandits and their sufferings during the exodus. Highlighting how the threats became the message for the community, militancy became an important reason and the fact how 4 lakh Indians had to flee their homes as they continue to live as refugees, Shikara presents an engulfing and gripping trailer.

Marking their first, the lead actors Aadil Khan as Shiv Kumar Dhar and Sadia as Shanti Dhar look promising and build the intrigue with their portrayal. The trailer definitely serves the potent dose of history, reality, curiosity and thrilling storyline. After the motion poster that was released earlier, the trailer has piqued the interests of the audience with its enchanting weave.

Also, sharing how this movie is his tribute to his mother, Vidhu Vinod Chopra recently also shared a special video with the audience. The video chronicles the journey and timeline of his mother’s life telling us all about the inspiration behind the storyline.

Shikara will be hitting the screens on 7th February 2020. Presented by Fox Star Studios. Produced by Vinod Chopra Productions and co-produced by Fox star studios.

Also Read: 30 Years of Parinda: Vidhu Vinod Chopra reveals interesting facts about one of his most special directorials