Shah Rukh Khan and his stardom has always been the talk of the town. And when we talk about his fans, it is not just within the country but also international. SRK is a known name across the globe and enjoys fan following in the USA, UK, and even Saudi Arabia. He recently attended the Red Sea International Film Festival held in Jeddah and needless to say, videos from the festival found its way on social media where it is going viral. The video captures the reaction of Sharon Stone when she spotted the superstar right next to her during the felicitation ceremony at the film festival. 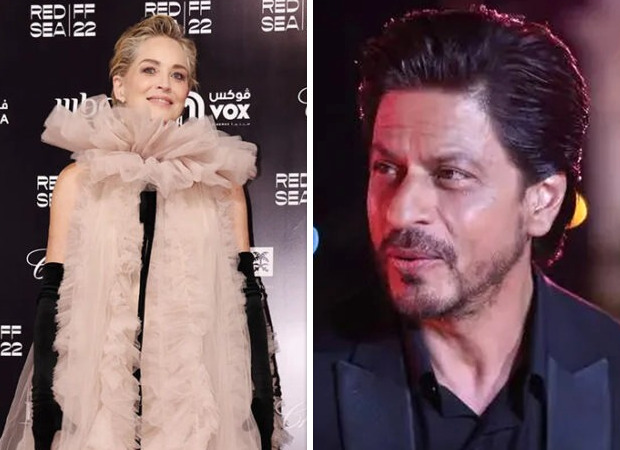 Sharon Stone fangirling about Shah Rukh Khan in this video from Red Sea International Film Festival is the best thing on the internet today; watch

A video of the Total Recall actress surfaced online where we can see a rather surprised Sharon Stone clutching her chest as she shrieked over the presence of Shah Rukh Khan. As the host was introducing Khan, Stone suddenly realized that the superstar was actually sitting only a seat away from her all along and her response seems to have left many netizens surprised too. In response to her reaction, the chivalrous SRK bent down to plant a peck on her cheeks before taking his seat again. This video seems to have gained a lot of love from netizens who have been posting about it on social media.

On the other hand, talking about Shah Rukh Khan, he also received a special honor at the Red Sea International Film Festival. In the video, the actor also gave a lovely acceptance speech after receiving the award saying, “I am truly honoured to receive this award from the Red Sea International Film Festival. It's wonderful to be here among my fans from Saudi and the region who have always been huge supporters of my films. I'm looking forward to celebrating the region's talent and being a part of this exciting film community.” Interestingly in his speech, the actor also mentioned Sharon Stone wherein he quirkily quipped, that amidst dignitaries he would like to interact with, he would like to ‘sit in front of Sharon Stone and stare at her for the rest of his life’.

Knowing his witty sense of humour, Shah Rukh Khan once wooed audiences with his speech. On the film front, the actor’s next film Pathaan marks his return to the theatres after four years. Besides that, he also has Dunki with Taapsee Pannu and Jawan with Nayanthara in the pipeline.