Shah Rukh Khan recently took off to China to attend the promotions of his film Zero which is releasing in the country soon. The film, which released worldwide in December, features the superstar as a vertically challenged man and also stars Anushka Sharma and Katrina Kaif. The actor’s film will be screened at the 9th Beijing International Film Festival. In fact, when the actor landed at the airport for the same, he seems to have been mobbed by the fans out there. After his airport shenanigans, the actor had a list of press conferences and meets that were a part of his itinerary. During one of the interactive sessions, Shah Rukh Khan made a rather interesting announcement about his upcoming films. 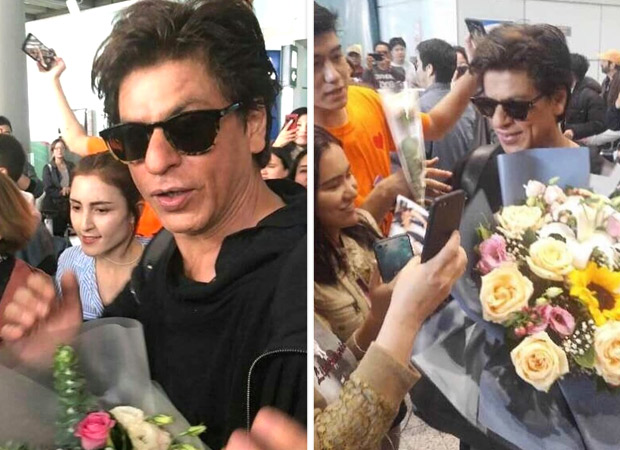 Readers would be aware that Shah Rukh Khan has a massive fan following across the world and China is no exception. Overwhelmed by all the fan love he received, the actor took to Twitter to express his happiness over the same.

What a warm and happy welcome here in China by SRK UNIVERSE China. Thx for the gifts, the flowers and the kisses. I am Red all over!! pic.twitter.com/0VFGjPBWQl

On the other hand, fan clubs of the actor started sharing many videos on social media about how his crazy fans welcomed Shah Rukh Khan to their country. Here are a few of them:

The excitement is beyond all the bounds when Baadshah of Bollywood is standing next to you ❤️ pic.twitter.com/wVcB3MsQ7A

On the other hand, Shah Rukh Khan also informed his fans during one of his interactive sessions about his next project. The actor revealed that he will be making the announcement about his next film in June. Here’s what he had to say:

Also Read: Shah Rukh Khan and Anupam Kher are missing each other and we think this calls for a Dilwale Dulhania Le Jayenge reunion!