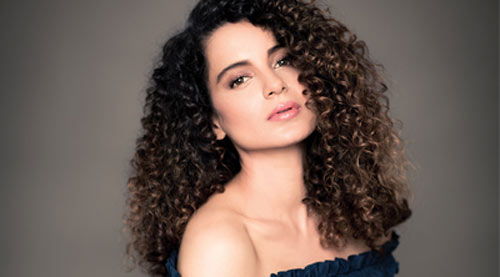 There was a time when Kangna Ranaut had a shaky career in the industry. The likes of Rascals, Knockout, Miley Na Miley Hum, Tezz and Game weren't being helpful, though Tanu Weds Manu brought her back in the game. A year and a half back, Kangna struck again with Krrish 3 and then a major milestone was achieved in the form of Queen. Almost overnight, the young woman was hailed as someone who was always a 'superstar material' and soon, even a flop Revolver Rani brought at least Kangna some accolades. While no one spoke about Ungli as it disappeared without a trace, the world is indeed talking about Krishika Lulla's Tanu Weds Manu Returns where she returns with her co-star Madhavan in director Aanand L. Rai run show.

Tanu Weds Manu Returns seems like one real fun movie for you.
I think what really works for the film that it is made in a real space. It is not one of those gimmicky double roles where both the characters look alike and you can't tell who is who. When you see the film you would realize how important this double role is for the screenplay.

So who is Dattu after all?
Well, for starters she is much younger than Tanu. She is an athlete, she comes from a lower middle class family, she has a face which is certainly very different from Tanu (laughs). We also worked on her hair. If you see, it is not a stylish cut; it is just a simple boy cut. Woh chote shehhron mein hota hai naa ki ladkiyon ko boy cut kara dete hain, waisa hai. I was game for it.

What happens to Tanu though?
She is going through her own challenges. A span of four years has made her a different woman. Yes, somewhere she still has that free spirited element in her intact. However, she is frustrated as she is on the verge of a failed marriage. There is certain level of desperation; certain melancholy that is bothering her. On the other hand Datto is vibrant. She has hopes and dreams of a better future, she has a plan. She is self-made woman too who is studying at Ramjas College, Delhi University on a sports quota. The best thing is that Datto is pitted against Tanu and I am not partial to anyone.

How does that work?
Both women are equally important. As Tanu I used to hate Datto, and vice versa (laughs). As an audience you would feel that both women deserve fair chance. Actually, they are extension of my personality and I have added my own perception and depiction. That said, initially I was a bit skeptical that lambe daant hai, ek tareeke ka accent hai, make up nahi hai. Jabki Tanu is glam, she has all the one liners and dialogues jo ki bahaut hi filmi hai. Seeti-taali bajegi un par (smiles). I was hoping that Datto also gets some good recognition. Abhi ulta ho gaya, now I am a bit worried that Datto is getting all the attention.

Meanwhile there is Madhavan who is bound to get his fair share of attention as well. How does your chemistry work with him this time around?
Madhavan is like a friend, I know him for so long. This kind of equation gives you the liberty of being relaxed and at ease. We have worked in a successful film together, and hence our bond is priceless. See, when a film works then you tend to share a lot more happy memories. There are success dinners and success parties, due to which people keep meeting again and again. I share certain equation with Maddy for years. When he was on the sets, it was like being with the family.

Director Aanand could well be another family, right?
Aanand has proved himself in a big way, whether it is Tanu Weds Manu or Raanjhanaa. He is incredible. With him, there is always a lot of team work involved. No one comes with any rigid perceptions. Everyone works collectively; we did many workshops and trials with cameras also, since we were going to use them for the double role. It was very tough because during the shoot, I was reacting to a pole for the double role part. Aanand is one of the most fantastic and clear people around. He wants to bring a man and a woman on screen again and again and in different set ups. He knows that he is here to make love stories.

6 Underrated series that have taken the…

“Gaming is a huge market for music and we…

"We were starving after Game of Thrones" -…