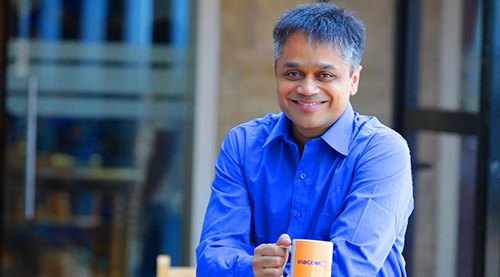 2015 is a rollercoaster year for the film industry?

I agree, the entire year has been a challenging one for the industry. But there are two bright spots. One is the Hollywood slate. We've seen what Furious 7 and The Avengers have done

this year. We at Viacom 18 who are involved with movies in all languages see that as a heartening trend because we've two major Hollywood titles coming up Mission Impossible and

Amidst the slackness there is this bright of hope?

Yes, Viacom 18's Gabbar Is Back has defied all expectations by becoming a big success. It is presumed that the conventional mainstream entertainer is outdated. I think that is a fallacious

reading of the reality. Every film cannot be evaluated by the same yardstick. Gabbar Is Back has its own grammar.

While the audience lapped up Gabbar most critics blasted it. Do you think critics are cut off from the ground reality regarding audiences' tastes?

The critics have a job to do. They look at the story and craft. They've a unique independent position. A film like Gabbar Is Back thrives on audiences' spontaneous reaction rather than

critical responses. Sequences have clearly connected with audiences. I say there is no substitute for good execution. In fact we've lately returned from the National awards where Viacom scored big

with Mary Kom and Queen. Look at these films. They've won the awards and the audience. To me, that's the real triumph.

Would Viacom be encouraged to sponsor more formulistic films after Gabbar Is Back?

We've always produced a mix of conventional and unconventional films. We've in the past produced films like Son Of Sardaar and Boss which were out-and-out conventional mainstream.

There are different routes in the cinematic journey. We may take the commercial route in a film like Gabbar Is Back in the future. Or in a film like Margarita With A Straw we take the

inspirational route. Our Bhaag Milkha Bhaag, Mary Kom or Queen inspired the nation to excel. With Gabbar Is Back we got summer footfalls and a long holiday weekend. Marketing

every film correctly is also important.

Gabbar goes for the tried and tested formula?

And yet, it's never thin on plot. I think a sturdy plot is essential to hold audiences' attention. We adapted Gabbar from a very successful Tamil and Telugu film. But it is not blind remake.

A lot of producers and corporates are cutting down on marketing costs?

But the film industry is not looking at the real problem, namely the star prices. Stars are pricing producers out of a film. The industry needs to address this question of the emperor who stands in

the room every time a film project is discussed. Out of an age-old reverence for the star system no one is willing to bell the cat. The point is, if in a 70 crore rupee film, a star charges Rs. 30

crores, what are the chances of the product turning out financially feasible?

Is that the reason why Viacom has gravitated towards cinema with the female hero?

Yes and no. We are looking at financially feasible options and yes, if the male actors are not proving financially sound we have to turn to other options. But the more tenable reason for doing

films with female actors is that there are many exciting scripts outside conventional precincts featuring women in central roles. If you see our films from Tanu Weds Manu to Gangs Of

Wasseypur to Oh My God To Kahaani, are looking at being trendsetters. Now other production houses have picked up our trends. They are doing bio-pics and female-centric films. But

we did try to re-invent the entertainment formula and set up new agenda.

What is the solution for the problem of heroes charging through the roof?

The business model of actors partnering with production houses, like Aamir Khan does. The more we move towards this model the more feasible film projects would become.

Tell me about Viacom's forthcoming films?

We are very excited about Drishyam. It combines the star power of Ajay Devgn with a very powerful theme. It's shaping up very well. The role was earlier played by Mohan Lal, Kamal Haasan and

Venkatesh in various South Indian languages. We're releasing it on 31 July. And then we have Manjhi The Mountain Man in which Nawazuddin is brilliant. Then we have our franchise film

Pyaar Ka Punchnama 2. This is our franchise for youth.

Is the youth your primary audiences?

Yes. If a film connects with the youth it has a staying power. Gabbar Is Back, I'd say, is attracting a slightly older audience.

Do you think the second-half of 2015 would be better at the box office?

There's absolutely no problem with audiences if they like a film. The problem according to me is, we're out-pricing the producer. Nobody thinks of what happens to the producer. The entertainment

industry is ailing like the airline industry. Today if you look at the television industry, it is five times the size of the film industry. And we still call cinema the big screen!

Absolutely. Some fundamental economic issues regarding the film industry need to be addressed. We need to exercise corrective measures. We cannot skirt around the key issues. At the moment the film

industry is in a denial. We need to stop being awed by stars and let them know we can't afford them at their current prices. We are thrilled to have an Akshay Kumar in Gabbar Is Back. But

we're also thrilled to have made a huge impact with Kalki Koechlin in Margarita With A Straw. We are going through a very exciting phase.