Last Updated 24.09.2020 | 9:18 PM IST
feedback language
follow us on
Home » News » Bollywood Features News » Bollywood News When Salman Khan got hit by a bamboo and beat up fans outside his building (watch video)

Kapil Sharma has relaunched his show and going by the reviews of his first episode, he's doing great. Next guests on his show are the Khan brothers: Salman, Arbaaz and Sohail. The trio will have a blast on the show as they reminisce their childhood memories and other fun things. While chatting with the brothers, Kapil asked them if they ever got into a fight with outsiders and they had an interesting anecdote to share. A bunch of fans were abusing Khans from the outside and that infuriated Sohail who went to confront them. They got pissed off and a gang emerged to support them. Salman came out to save Sohail from the bunch of rowdy attention seekers and himself got beaten up! Now that's highly unlikely no? But well as bizarre it may sound, it happened. Further, Salman even recalled being hit by a Bamboo and his reaction after getting beaten up is just funny. Watch video and you will understand what we're talking about. 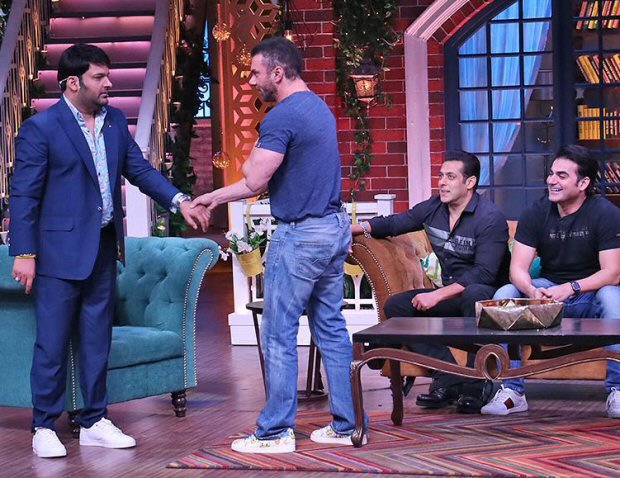 Salman Khan is currently working on Bharat and he has just finished his annual television stint with Bigg Boss. Bharat is one of his most ambitious project as it is adapted from the Korean saga: Ode To My Father and stars Katrina Kaif as the lead along with Disha Patani and Sunil Grover in important roles.

A post shared by Sony Entertainment Television (@sonytvofficial) on Jan 2, 2019 at 4:53am PST

A post shared by Sony Entertainment Television (@sonytvofficial) on Jan 2, 2019 at 2:48am PST

Salman Khan also celebrated his 53rd birthday at his Panvel farmhouse and everyone from Katrina Kaif to Shah Rukh Khan made it to his bash!