Actor Arbaaz Khan is  ack with the second season of his talk show Pinch. In the show, Arbaaz invites several celebrities from Bollywood as guests and reads out all the mean and troll comments in front of them. In this season, Arbaaz's brother and star Salman Khan will inaugurate the show. 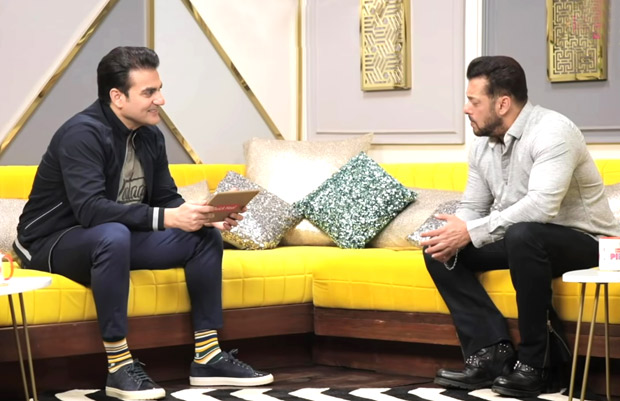 Recently, in the trailer which was launched, we have got glimpses of the first episode in which we can see Salman Khan giving befitting replies to all the trolls and mean comments netizens have been writing on him and his acting.

In the promo,  Arbaaz introduced Salman as “the ever Chulbul and my bade bhaiya, Salman Khan”. As the two brothers start chatting, Arbaaz is seen reading out all the hate comments about Salman. The actor carefully listens to all of them while being calm and composed.  Salman also reveals that he does not check the likes or comments on any of his social media posts after sharing them.

Later in the promo, Arbaaz read out a comment in which a social media user alleges that Salman got ‘well-settled by taking their money and demanded it back. To which Salman Khan gives a perfect answer and says, “I didn’t steal any money, I must have stolen hearts."

While another user says tha  Salman has mastered the art of 'dikhawe wali acting' (showboating). To which, the Radhe actor replied, "Okay, then you do it too. Even to show off, you need a big heart and courage.” He also added that no matter how good an actor you are, you cannot hide your true personality for a lifetime.

Meanwhile responding to all the comments, He also said that people might think that they can get away with anything and everything but the cybercrime team can track such offenders in a second even if they make themselves anonymous.

In the last, he also talked about that even if a celebrity refuses to comment upon something and says 'no comments' and even then things are blown out of proportion. “People make so much ado of that ‘no comment’ and say that he does not want to speak even though others are willing to talk about it,” he said.

Shooting or having fun, it's the same with 'Bade Bhaiya' on the sets!
Watch the first episode of Pinch Season 2 on 21st July 2021.❤️

“Everyone on the set of Kumkum Bhagya wants…