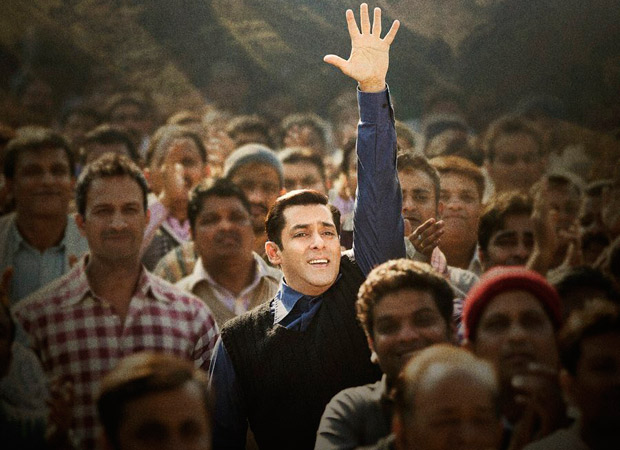 Ever since the release of Dabangg, Salman Khan has been on record setting and record breaking spree. With 10 centuries in a row, the superstar has pretty much ruled the Rs. 100 Crore Club. It is in fact a no brainer that he would score his eleventh in a row with his next release Tubelight as well, which arrives on Eid this year. However, the challenge is a bit different this time around. Not just he needs to now score the biggest day ever when it comes to holiday release, he also needs to go past an unlikely competition in the form of SS Rajamouli-Prabhas-Rana combo that has delivered an All Time Blockbuster with Baahubali 2 [Hindi].

"So far, the biggest first day record has been held by Shah Rukh Khan's Happy New Year which had netted Rs. 42.60 crore on its Diwali release. However, after that it is Salman Khan all the way, what with the other two films in Top-3 list boasting of his presence. While Prem Ratan Dhan Payo netted Rs. 40.35 crore on its Diwali release, Sultan brought in Rs. 36.54 crore when it released a day before Eid," informs our trade source.

However, Salman just can't be content with topping his own record now. He needs to go past Baahubali 2 [Hindi] as well which did the unthinkable by bringing in Rs. 41.50 crore on its first day.

"Well, only once he goes past Baahubali 2 [Hindi] would Salman be able to challenge Shah Rukh Khan's Happy New Year, and here we are just talking about the opening day. Of course, he wouldn't have seen such competition coming but it is reality now. The battle-drama has entered the record books on its merits and now Tubelight would need to be an ultra-superior product in order to reach the top," the source adds.

For Salman Khan, the odds are in favour though.

"First and foremost, he is at the peak of his career and has stayed there for many years now. Moreover, he is reuniting with director Kabir Khan two years after Bajrangi Bhaijaan which was an All Time Blockbuster. The release date is perfect too since Eid is on Friday, June 23. Also, it is a solo release, doesn't have any major competition from the week before or the one after. The only thing that the film lacks is the presence of a leading lady, but then how many across pan-India knew Anushka Shetty either? Still, people did come in for Baahubali 2 [Hindi], right," states an industry veteran.

All that is of course needs is the kind of content that Tubelight has to eventually offer and this is where the film's theatrical promo would make all the difference.

"The film will of course take a huge opening but the question that is asked for a Salman Khan starrer is - 'How big an opening?'," the veteran continues, "You can't be content with an opening in the 30s now. The game has changed with Baahubali 2 [Hindi]. It has been shown that even on a non-holiday, audiences are willing to come in hordes and register footfalls that ensure collections in excess of Rs. 40 crore. Salman Khan is the biggest pan-India superstar in the country for last man years now. He has to make that count now with Tubelight too."

What it would eventually boil down to though is one single word - 'Content'!