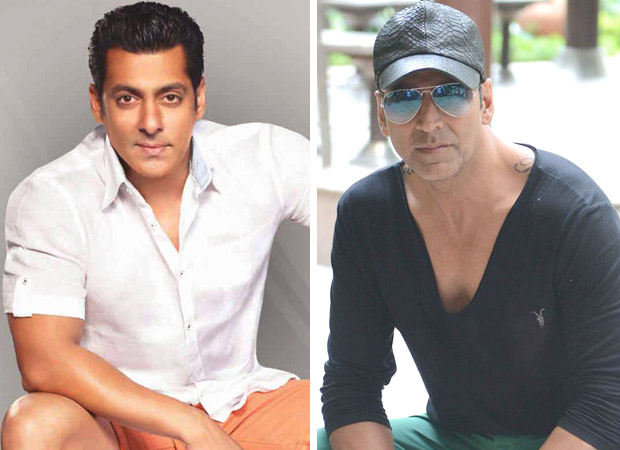 The newsbreak was truly sensational!

The moment it was announced that Akshay Kumar has been roped in by Salman Khan to act in his production, media broke into frenzy. After all, both the actors are on the top of their game and with Karan Johar coming on board as well, the combination turns out to be as lethal as it gets.

What makes the announcement special is the fact that this is a unique instance where one superstar has roped in another superstar for his production and won't be actually stepping in as a leading man. Now that's something unheard of in Bollywood. Though there are superstar seen producing films in the past, they either bring themselves on board as well or rope in an actor who is relatively much junior. However, one doesn't recollect any instance over the years gone by where two superstars are coming together with one putting money on the other.

So is this a start for many more good things to come in 2017?

"Very likely," says a trade insider, "Time and again industry goes through changes. It is needed as well. The world is moving ahead and while corporate houses are careful in green-lighting biggies in Bollywood, it is a welcome trend to see two superstars and a major producer joining hands to keep the ball rolling. That is the best way to keep the industry wheels moving."

More than anything else, it also demonstrates good camaraderie amongst the men who are ruling the show after being in the industry for over quarter of a century each. SalmanKhan and Akshay Kumar started a storm in 1989 [Maine Pyaar Kiya] and 1991 [Saugandh] respectively which has won them millions of fans over the years. On the other hand Karan Johar is the master of the game himself and has been making films since 1998 [Kuch Kuch Hota Hai]. With the trio coming together, one looks forward to the model being emulated by others in the business as well.

"While this is a fresh start for Bollywood, it is already a trend in Hollywood," an industry veteran adds, "George Clooney, Brad Pitt, Leonardo DiCaprio, Sylvester Stallone and many other superstars in Hollywood have time and again made films with other superstars without the lure of featuring themselves in there too as an actor. It is not always about being in front of the camera each time around. Sometimes the best results are achieved when you believe in another superstar to take the centre-stage and you primarily keep the show running from outside the ring."

The model has worked quite successfully in Hollywood over the years and now that Salman Khan, Akshay Kumar and Karan Johar have taken the plunge as well, one just hopes that this could well be an indication of better times ahead in months and years to come as well.

For Box – You could also have a slideshow around this

Hollywood actors who have roped in other actors to feature in their productions:

Producer George Clooney roped in Ben Affleck as an actor as well as director for Argo. He is also producing Ocean's Eight with Matt Damon

None of these films feature the producer himself.

Sunny Singh opens up his preparation for…