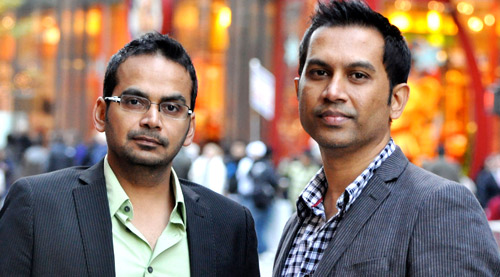 With just a week to go for Happy Ending, the film is finding good momentum going for it and peaking at just the right time. The Saif Ali Khan-Govinda-Ileana D'Cruz starrer was immediately noticed for its quirky quotient once the First Look was out and later when the songs were unveiled, it was clear that director duo Krishna DK and Raj Nidimoru were attempting something different all over again after 99, Shor In the City and Go Goa Gone. Not just that, as despite the film being a Saif Ali Khan production (who has made it along with Dinesh Vijan and Eros), the actor didn't have any qualms when Govinda took center-stage.

"That's because Saif is a mature enough actor who understands when a scene belongs to another actor," the director duo says in unison, "Why just Govinda, at times even for Kalki he used to say that 'let me step back as the scene is hers'. We believe it takes a lot of self assurance for any actor to do that. What goes in favor of Saif is the fact that he is not an insecure actor. Even though Happy Ending is his film and he is the main lead in there, he never shied away from letting others hold the scene."

No wonder, while Govinda is dancing away to glory with 'G Phaad Ke' and is getting the house down with his one liner in the promo itself, the audience is looking forward to what the actor has to offer in one of his comeback films this season (another being this week's Kill Dil).

"Yes, people are loving Govinda and it is all working out very well. It is after a long time that he is being seen on the big screen. Since he is playing a Bollywood star, he is also so very convincing in bringing satirical elements about stars in general," Raj adds.

As for humor element in general for each of their films, the director duo says that it is their natural style and doesn't require any conscious effort.

"Humor finds its way in whatever we write. We don't try to make it funny, it just happens. Look at Shor In The City, you would find many reasons to smile there as well," says Krishna, "See, there is so much humor in real life. We can always find something funny in various episodes and anecdotes. It is a matter of finding the right angle and the right performances. Presence of Saif and Govinda allowed us that."

One thing which is clear about Happy Ending and Saif is the fact that he is pretty much in the zone that he is liked most. So what did he bring on the table when work commenced on the film?

"Basically the main thing he brought with was honesty," Raj-Krishna comment, "The biggest thing that you can do is being totally into the character you are playing. Otherwise it limits you when you think that 'Ok, so I am the hero and I should do this and should avoid doing that'. Saif doesn't do that. As a matter of fact, during the making of Happy Ending, he did a lot of improvisations and we retained most of them in the film. Saif doesn't go by the notion of standard way of canning a scene; he brings in a lot of fresh acting for the camera."