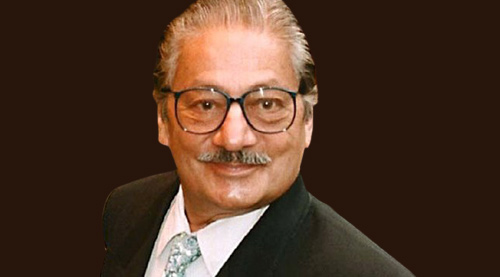 Saeed Jaffrey, the actor who worked with the broadest possible range of directors from Satyajit Ray (Shatranj Ke Khiladi) to Kalpataru (Ghar Ho Toh Aisa) is no more. He died on Tuesday at age 84.

Sadly we were informed of this versatile actor's death through a relative's Facebook announcement. Bollywood had lost touch with, and interest in, Saeed after he left the industry in a huff.

The very talented and at the moment, deeply saddened actress Deepti Naval happened to work with Saeed in one of his last films.

Deepti recalls his disillusionment. "I remember we were shooting for a film that neither of us was enjoying shooting. It was called Ghar Ho Toh Aisa. He was miserable shooting it. He had told me, 'Enough. I am going back to London. Ab jo hoga wohi dekha jayega' (Whatever is to happen will happen there)."

Deepti and a lot of Saeed's friends in Mumbai feel Bollywood couldn't really find a place for him.

"Look at his range of work. It was staggering. He worked with Satyajit Ray, Raj Kapoor, John Huston (The Man Who Would Be King), Sai Paranjpye, David Lean, Yash Chopra and Raj Kapoor. He enjoyed his work thoroughly, and it showed," says fellow-actor Om Puri.

Saeed who was born in Punjab was a natural-born actor. At an early age he started his own theatre group in Delhi and went on to flirt-some would say fornicate-with Shakespeare, Tennessee Williams and Christopher Fry.

Inured in the classics of the theatre world, Saeed made his way into Bollywood in 1972 with a long-forgotten Rehana Sultan starrer Tanhai. It was Vinod Pandey's Ek Baar Phir which brought Saeed into the attention of Bollywood's big filmmakers. From then onwards Saeed sold his soul to the highest bidders in Bollywood. He became a commercial worker.

Recalls Deepti Naval, "Ek Baar Phir was my first film. I was new to India and Indian cinema. So was Saeed. We hit it off instantaneously. He was very protective towards me. Perhaps I came across as vulnerable, and he saw that. He had a fabulous role in Ek Baar Phir. He played an actor. A character actor."

Not hard to do for Saeed who made a career of it.

But it was the incorrigibly goodhearted paan-seller Lalan Miyan in Sai Paranjpye's Chashme Buddoor that Saeed obtained maximum recognition in India. It was an instantly likable character and it connected with the audience better than any character that Saeed played in India, barring that of the leading man Rajiv Kapoor's do-gooder uncle Kunj Bihari in Raj Kapoor's Ram Teri Ganga Maili.

With Raj Kapoor, Saeed hit it off immediately. Their drinking sessions together extended to another film Henna which was completed after Raj passed away. But it was Chashme Budoor for which Saeed is best remembered.

Deepti Naval recalls Saeed's enthusiasm for the part. "We were shooting in the Nizamuddin area of Mumbai where a paan shop had been set up for Saeed's character. When Saaed arrived he looked around the crowded area, spotted a man walking by in a lungi (sarong) with the Taj Mahal printed on it. He made up his mind that his character Lalan Miyan would wear that lungi. He made the passerby take off that lungi and wore it for his character. That's how I'd like to remember Saeed. Vivacious and exuberant as an actor. When he wanted something he would get it anyhow."

Andrew Robinson recalls in his fine book on Satyajit Ray The Inner Eye how Saeed accosted Ray at the Beirut airport to be part of his cinema. Ray who knew Saeed as the husband of the cuisine queen Madhur Jaffrey told Saeed to be patient.

The role happened sooner than expected. Saeed performance in Ray's Shatranj Ke Khiladi is regarded by many including Saeed himself, as his finest ever

Says Naseruddin Shah appreciatively, "Zia Mohyuddin and Saeed Jaffrey were the first sub-continental actors to make a mark on the British stage."

Adds fellow-OBE recipient Gurinder Chadha, "Saeed is very much a British Asian institution. He was one of the few actors who managed to shine in both British movies like Gandhi and Hindi movies like Chashme Buddoor. The ease with which he performed both roles to perfection is indicative of his breadth of talent."

Saeed's laughter preceded his presence wherever he went.

It is for that laughter of vivacity and the joie de vivre that Deepti Naval would like to remember Saeed Jaffrey.

"I am sure he is up there entertaining the angels with his anecdotes about all the actors and directors he worked with in Bollywood and Hollywood. If I am lucky I'd also feature in one of his anecdotes," says Deepti.