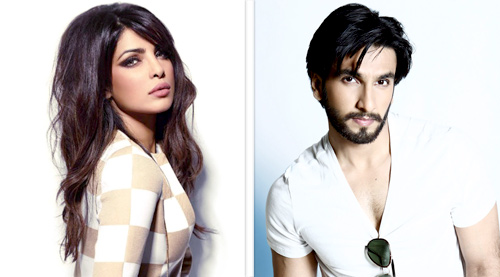 Now this is one interesting trivia that we couldn't resist sharing. Guess what, Bajirao Mastani would be the fourth instance when Priyanka Chopra would be seen sharing a frame with Ranveer Singh. However, yet again, it won't be a walk down the sunset for the duo.

Well, here is why!

Ram Leela: The first time they came together, it was for Sanjay Leela Bhansali's last film, Ram Leela. Well, it wasn't really a 'coming together' per se as Ranveer was blissfully finding himself in Deepika Padukone's arms even as Priyanka gyrated seductively to the tune of 'Ram Chahe Leela'. It was almost like her enticing the lovely couple to get into the act, and didn't quite mind even as she knew that the guy was someone else's.

Gunday: Thankfully, it seemed like finally she would choose one of the two guys out there, either Ranveer Singh or Arjun Kapoor. Frankly, our bet was on Ranveer, and it seemed to be going right with the script too. Well, this is where director Ali Abbas Zafar decided to throw in a googly and off went those lovely sarees and out came that cop uniform. Oops, did someone just say 'double cross'? Game, set, match, over!

Dil Dhadakne Do: Fortunately for us souls, we were better prepared for what would be in the offing with this Zoya Akhtar film. Frankly, we didn't quite mind when both Kareena Kapoor Khan and Ranbir Kapoor said no to this brother-sister drama as this was our chance to see Priyanka and Ranveer together, even as siblings. Let the fact be stated, their chemistry was the best part of the film and that brotherly-sisterly love stayed miles away from being all sugar-n-saccharine, hence making it a beautiful viewing on screen. That said, as an on-screen romantic couple in love, they were missed.

Bajirao Mastani: Now that they are finally man and wife in the film, it is a situation of Main, Meri Patni aur Woh created by Sanjay Leela Bhansali. So while as Kashibai, Priyanka plays the lawfully wedded wife of Ranveer 'Bajirao' Singh, there is love triangle ka teesra angle in the form of Deepika Padukone. So much that as 'Mastani', she is even finding herself prominently in the film's title too. Our guess is, Priyanka would have something interesting up her sleeves, even as Ranveer gets swayed by Deepika's charms. Otherwise, an actress of her caliber can't be expected to latch on to anything that is below her standing.

Will she finally catch hold of Ranveer on screen, and retain him as her beau? Guess we would know a month from now once the film arrives in theaters. Till then, keep guessing!