We all know that Shraddha Kapoor and Prabhas have kicked off the shoot of Saaho. And now with the film shifting base to Mumbai, they have their antagonist joining the shoot schedule. We are talking about Neil Nitin Mukesh who will be seen in the role of a villain in this multi-lingual film, directed by Sujeeth. 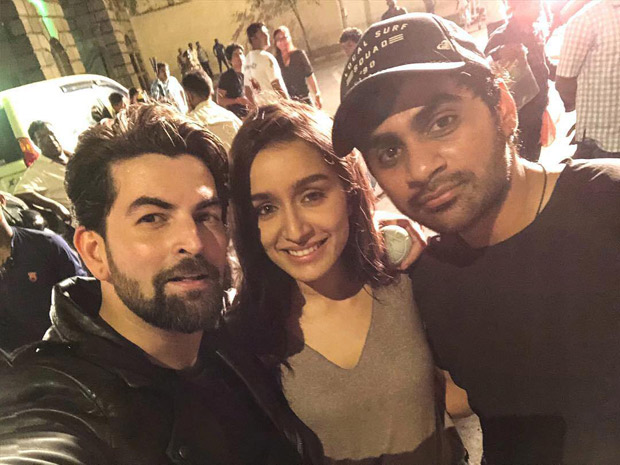 Saaho, as we have seen in the teasers before, will be an action packed drama and will feature Neil Nitin Mukesh as the quintessential negative character. We hear that the actor even underwent extensive training for the role. He has shared about it on his social media in the past and now he has joined the team in the city to complete the shooting of the film. He recently shared a picture with Shraddha Kapoor and director Sujeeth from the sets of Saaho.

Action time in Mumbai finally. #saahoinmumbai #saaho with the ever so beautiful and amazing @shraddhakapoor and my darling brother and director @sujeethsign

Readers would be aware that Saaho is expected to be one of the most expensive films being made in India. It also features prominent celebrities from the Bollywood industry like Jackie Shroff, Mahesh Manjrekar, Mandira Bedi amongst others.

With action coordinator Kenny Bates choreographing action for this adrenaline pumping film, the film is expected to hit the big screens in August 2019. The film will be releasing in Tamil, Hindi and Telugu. This will be the next film of Prabhas after his blockbuster film Bahubali.

What a fab day on the sets of Saaho. @sujeethsign #prabhas #darling #hyderabad #teamwork #nnmteam

A day with these men on the sets of #SAAHO . our Fabulous Director @sujeethsign and the Great Action Director Kenny Bates #kennybates #Action #boom #madness

Also Read: Saaho – This romantic photo of Shraddha Kapoor and Prabhas gets LEAKED from the sets of the film!