A lot has been said about Karan Johar and Kajol considering that the two of them have seen many ups and downs in their friendship. But their biggest fallout was when Karan Johar wrote his autobiography where he had asserted that he doesn’t want her back in her life. But all of it was a thing of the past! Kajol and Karan let bygones be bygones when the latter had twins via surrogacy and their friendship rekindled which was very visible on Koffee With Karan 6. Now we will get to see a glimpse of it yet again on television and this time it will be on The Kapil Sharma Show. 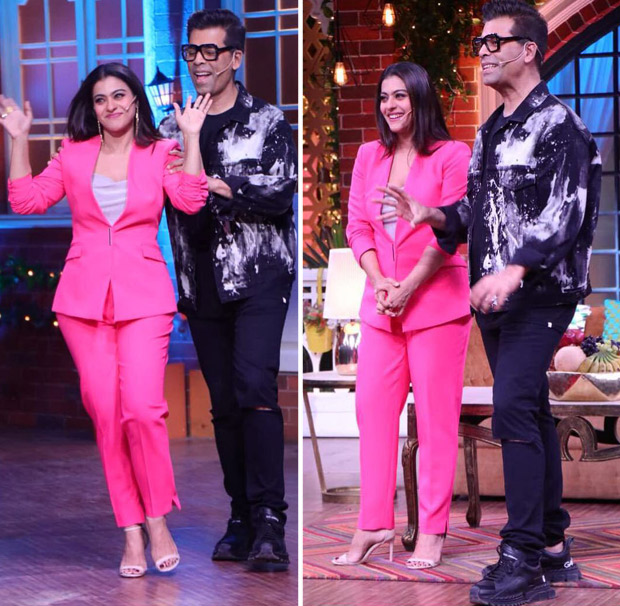 Readers would be aware that Kajol and Karan Johar were seen having a gala time the last time they came together on the small screen. It was for the latter’s chat show Koffee With Karan 6 where the Baazigar actress was accompanied by her husband Ajay Devgn as the guest. It seems that Kapil Sharma wanted to rekindle the director and the actress’ chemistry on the small screen too and hence decided to invite them together on the show.

We also hear that Kapil has been keen on shooting this episode for a long time but the busy schedule of the two of them weren’t permitting the same. While Karan was busy with his film releases, Kajol has been dedicating time to her children. Recently, pictures of Kajol and Karan coming together on the show were shared by celebrity stylist Radhika Mehra.

And the comedian Bharti Singh, who too is a part of the show, shared a picture with them from the sets:

Kajol and Karan Johar’s friendship goes back a long way and the actress was even one of his lucky mascots in films.  However, it turned sour when her husband’s ambitious film Shivaay clashed with Karan’s Ae Dil Hai Mushkil, followed by the accusations that the Dharma scion had bribed for his release. The producer had spoken about in his biography wherein he asserted that they both prefer to not be in each other’s lives and that it was all over! However, soon they decided to extend an olive branch and rekindle their friendship.

Also Read: Kapil Sharma gives a heart wrenching reply to people trolling him for going in depression on QuPlay’s Pinch by Arbaaz Khan