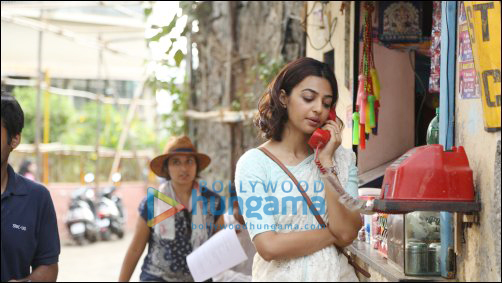 These days, actors go to great lengths to get the right look for their character. Radhika Apte is one such actress who is always ready to experiment with her looks. It was

recently revealed that Radhika plays the role of a PR executive in her forthcoming film Bombairiya. Radhika was recently spotted wearing a white lace saree clubbed with green sneakers in an

eastern suburb of the city. This apparently is her first look in the film.

Talking about the look, producer Michael Ward says, "Radhika Apte is a great collaborator and she and Pia decided on a shorter hair style to create the character of Meghna. She even introduced us

to Clover, a British hair and makeup designer working in Bollywood like me and they came up with a modern urban look that also conceals a mystery. This is just one of the looks that Radhika is

sporting in the film. Though it is a one day story, Radhika has three specific looks as Meghna who goes on the roller-coaster ride of her life."

Radhika Apte reminisces her night at the…

Radhika Apte expresses her grief on the…

"It was a tricky task to figure out what her…

Radhika Apte more visible in her…