If you’re active on social media, you must have definitely come across the #KikiChallenge dance video. This trend has completely gone viral and how! For those who are not aware, this challenge involves individuals dancing alongside a moving car to Canadian rapper Drake’s hit single, ‘In My Feelings’. ‘Kiki Do You Love Me’ is the opening line of this track and hence the name of the trend is #KikiChallenge. 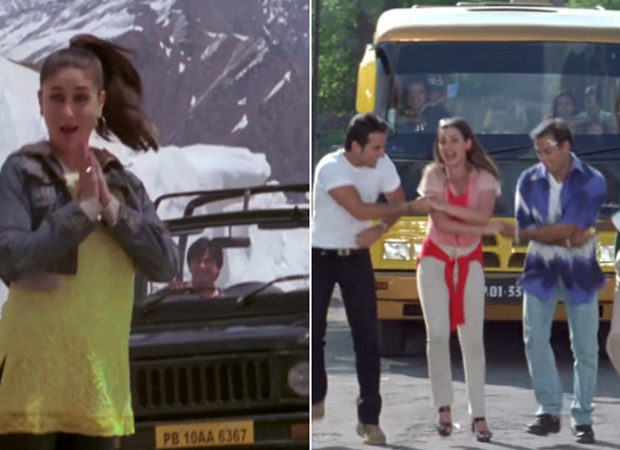 The most ironic thing of this whole affair is the original video song doesn’t involve a car. Yet, this idea of dancing to this song while shaking your leg alongside a moving vehicle caught on for some reason. It also became a global safety issue with police forces and Twitter handles of various city police advising people not to participate in this challenge as it can lead to accidents.

Interestingly, while this dancing-along-the-moving-vehicle trend has become a worldwide rage, Bollywood has always been indulging in it since decades. And that too with various kind of vehicles, not just cars! Let’s take a look…

See this video and you’ll realize that even the most daring #KikiChallenge videos are extremely pale in comparison. At one point in this song, Ashok Kumar, Kishore Kumar and Anoop Kumar all get down from their car. The vehicle keeps moving in circles while the trio run behind the car and then finally hop back into it. Even today, this scene leaves us amazed! 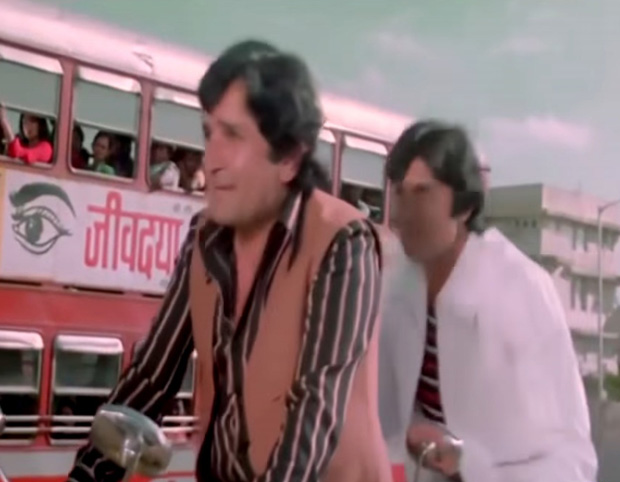 This was another ideal #KikiChallenge song of Bollywood. For almost half of this super-hit track, Amitabh Bachchan and Shashi Kapoor can be seen moving alongside the double decker bus by running and cycling in order to woo their ladies, Parveen Babi and Bindiya Goswami. 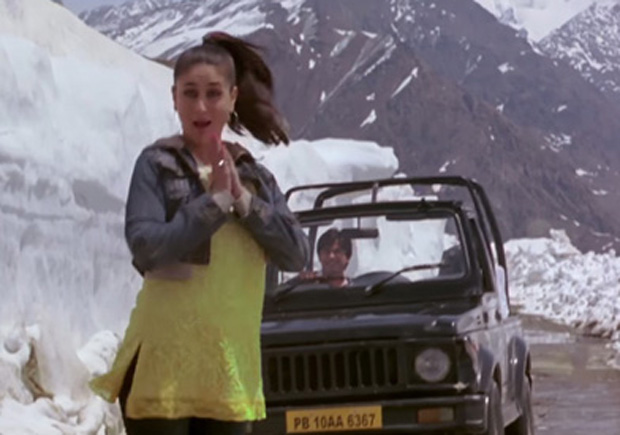 So excited is Geet (Kareena Kapoor) on eloping from her house to settle with her boyfriend that she steps out of the jeep and dances in front of it, albeit just for half a minute. 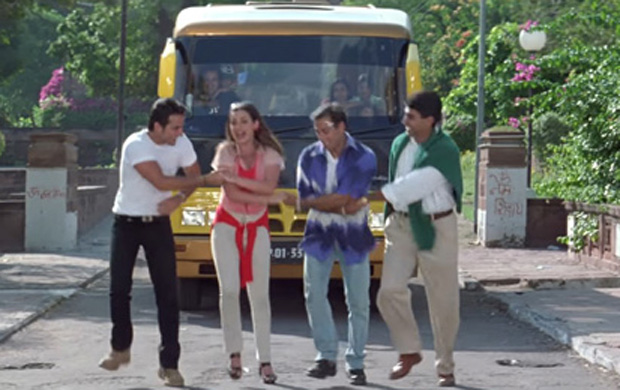 Who can forget this song of a group of siblings, their spouses and children going on an ultimate Sanskaari picnic? For a few seconds, Salman Khan, Saif Ali Khan, Mohnish Behl and Neelam indulge in the #KikiChallenge while Mahesh Thakur drives and follows them in a coach. 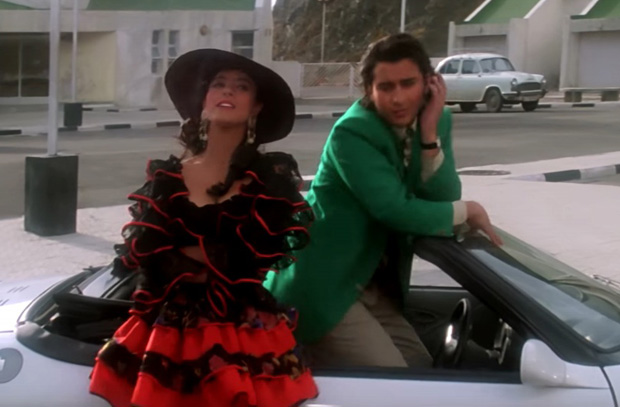 The #KikiChallenge lasts for the whole duration of the song as Kajol keeps dancing alongside and around the car, driven by Saif Ali Khan. She finally gets into the convertible only towards the end. 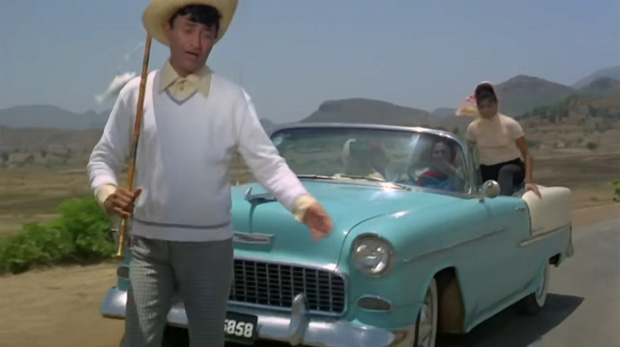 Dev Anand attempts to indulge in some mischief with the beautiful Tanuja by indulging in this challenge. He walks in front of her car and later even jumps atop the bonnet.

For just a few seconds, Salman Khan takes part in the #KikiChallenge but very safely. Instead of moving alongside the car, he prefers to move from behind the jeep, driven by late Lakshmikant Berde.

Dev Anand throws caution out of the window as he attempts to walk besides and in front of Zeenat Aman’s moving car and then climbs on it. Zeenat angrily swerves the car causing him to fall and yet the adamant Dev Anand continues to pursue her 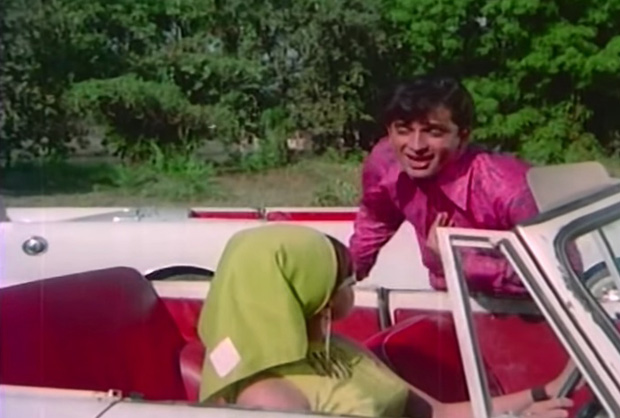 Shashi Kapoor woos by doing the #KikiChallenge and also goes one step forward by doing so in his own car which he moves alongside his ladylove Babita’s. 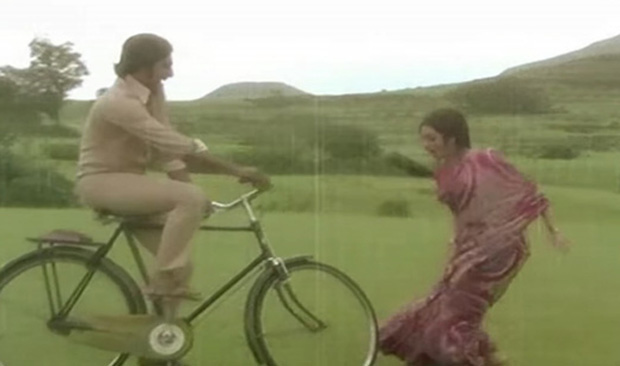 Why stop the #KikiChallenge videos at car? Bollywood has used many other modes of transportation to fulfil this challenge. One instance being this song from Aarop where Vinod Khanna rides the bicycle while Saira Bano gets down and both have a cute moment. At one point, it takes an unexpected turn as Vinod playfully tries to bang his cycle into Saira. 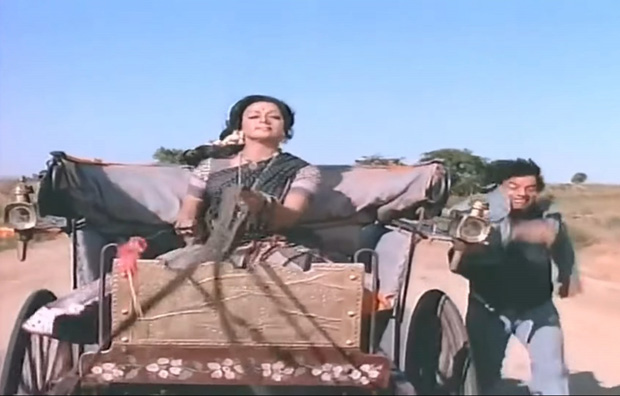 Here, Rajesh Khanna is not walking or running but instead driving on the road to Darjeeling while on the parallel railway track, Sharmila Tagore is amused by the antics while she’s travelling to the hill station in a toy train. 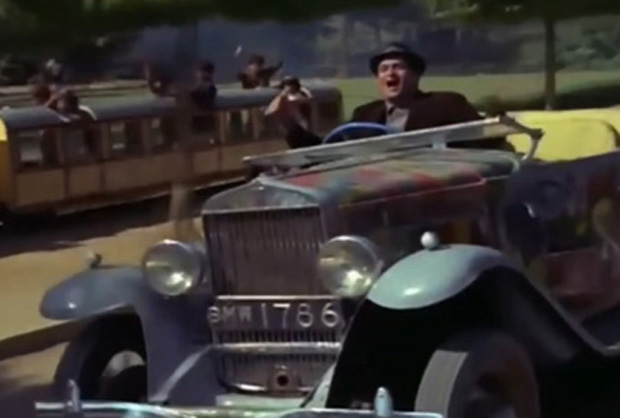 Shammi Kapoor does a ‘Mere Sapno Ki Rani’ as he drives his car alongside a miniature train in a play park and in one sequence, he also runs alongside. 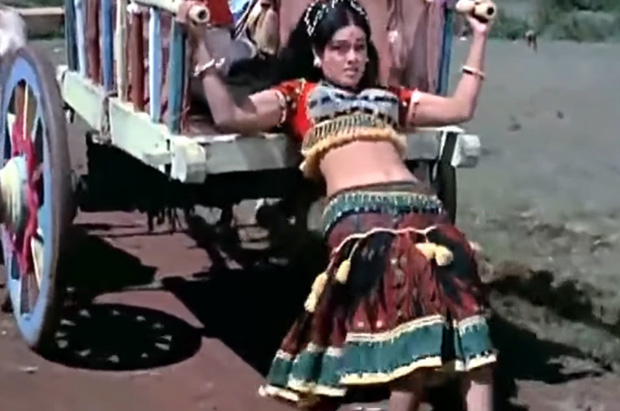 This is quite a safe #KikiChallenge video as it takes place alongside a slow moving caravan of bullock carts. Not just Jeetendra but even Aruna Irani joins in. 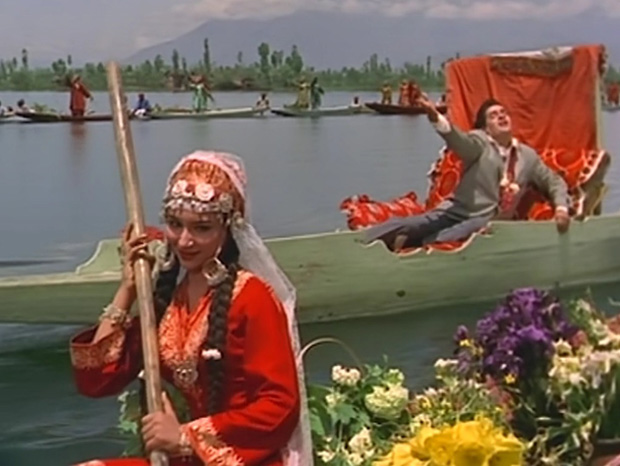 Shammi Kapoor pushes the envelope by taking the #KikiChallenge in the waters of Kashmir in this song from Kashmir Ki Kali.

Shammi Kapoor, in his quest to be the ultimate king of #KikiChallenge, moves from sea to the air. In An Evening In Paris, he follows his heroine in, believe it or not, a cable car!