Rakul Preet Singh, who is busy with her work schedule, is the March cover star for Elle India. Sporting some stunning looks, the actress makes a statement. She looks like a dapper boss lady. 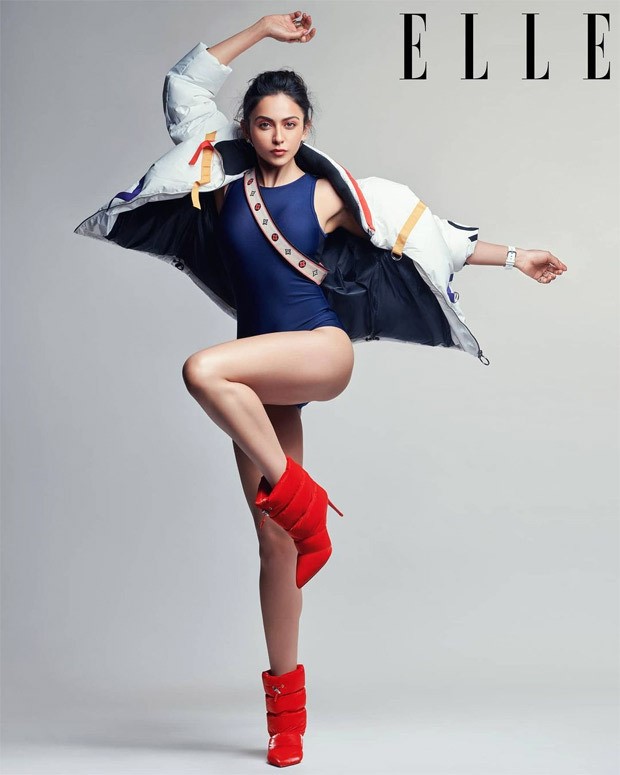 3D In the photoshoot, Rakul Preet Singh was seen donning a blue bodysuit with a white puffer jacket with blue and yellow details and belts. The red pointy boots were the talking point of the look and the cross body on the go Louis Vuitton twist bag was the highlight. She did glossy makeup, red eye shadow and messy pulled back hair. Rakul talked about her work ethic and called herself a focused person and she believes she's much more than her work.

n terms of work, Rakul Preet Singh has a packed schedule ahead. The actress will next be seen Netflix’s Sardar Ka Grandson, which also stars Arjun Kapoor in the lead role. It features John Abraham along with Aditi Rao Hydari in pivotal roles. Rakul Preet Singh will play the role of a pilot in the thriller-drama Mayday, which will be directed and produced by Ajay Devgn. The film also stars Bollywood veteran Amitabh Bachchan.