One can say that Tanushree Dutta has begun the #MeToo movement in India in a way ever since she accused Nana Patekar of sexual harassment. While Tanushree is seeking legal action against Horn Ok Pleassss team and Nana Patekar, she has also slapped a defamation case worth Rs 10 crores against Rakhi Sawant for accusing her of lying and being drugged on set while filming the song. A few days ago, Rakhi Sawant had claimed that Tanushree was doped and is lying about the whole incident during a press conference. 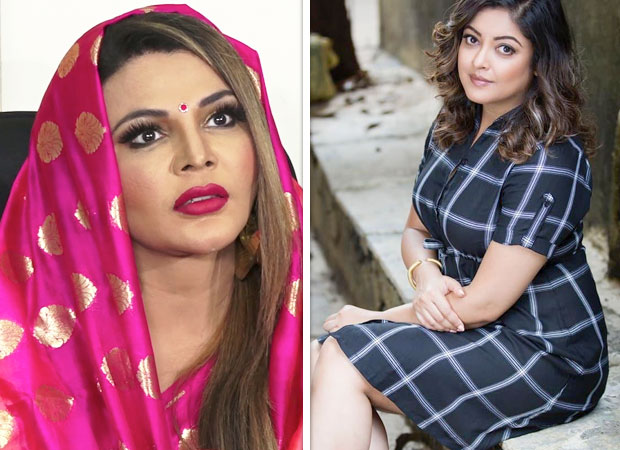 After the defamation case against her, Rakhi Sawant kept a press conference on Wednesday where she made shocking claims about Tanushree Dutta. "Tanushree has slapped Rs 10 crore defamation case against me. I am very sad and wondering 'why she has filed a case?' Who started it first? Tanushree Dutta went to the news channels and talked about being insulted and replaced by Rakhi Sawant. They could have found someone classy. It means that I am from a lower class. Tanushree, who gave you the authority to call me a lower class?"

During the press conference, Rakhi claimed that Tanushree is a lesbian and that the Aashiq Banaya Aapne actress raped her. "I want to tell about my story and what I went through. I am 'Angoor' and she is 'Langoor'. She couldn't have the 'Angoor' so that is why she has slapped me with Rs 10 crore defamation case. You are playing media - media and controversy - controversy game. Now, you will play court - court, and law - law game. I am too embarrassed to say this, twelve years ago, I was raped. Being a girl, I shouldn't even use this word (rape). I am ashamed, upset and hurting while telling this story. I haven't said anything all these years but Bollywood is getting blamed for everything. I have been feeling bad and upset and I have to say that I was tortured. I want to tell the world this disgusting incident has taken place with me not just once but several times. I am afraid to take name because I am getting threats for being murdered and gangrape. I have even filed a complaint to the police."

"People are talking about #MeToo. Now, I want #SheToo to happen. Rakhi Sawant was raped several times by Tanushree Dutta. Now, you will ask me how a girl can rape another girl? Article 377 has been ruled out. Why do you think Tanushree had gone bald? She is not a woman, she is a man. She is a complete man from inside. Tanushree Dutta, twelve years ago, was my best friend. I know Tanushree was Miss India and I know it. 'You were my best friend. You took me to rave parties two to three times. You say I have accused you of wrong allegations. You opened up a cigarette, removed the tobacco and the things you were filling it with, who was doing it? Some green colour stuff, what is it weed? I don't know," she added.

When asked whether she was also given the drugs, Rakhi Sawant further said, "Yes, I was also forced to have drugs two-three times. I was flying and I thought it was a cigarette. I was naive and innocent and I was forcefully given it in my mouth. I am here to tell you that she is a lesbian. Men also don't do rape, women do it too. This is the truth.”

“I never said anything and I have always respected women. I was silent till now. But, you made false allegations against Nana Patekar. I was silent about it and I thought I won’t say anything. You have slapped me with Rs 10 crore defamation; I will revert with Rs 50 crore case. I don’t know whether your lawyer has told you this but one has to pay certain amount before going ahead with the case. You pay Rs 10 lakh to the court, I will pay Rs 50 lakh in the court. You say you are Miss India but I am also Miss Andheri West. I was tortured all these years. She goes to these news channel like that of Arnab Goswami and starts screaming. What do you think that screaming in English means your story is true and people will believe you? They won’t. I will also say in court how you have used your fingers. Hands are given to eat food and not for anything else. I ashamed to say about the things you have done to my private parts, touched me and left my body for nothing. Tanushree Dutta, you are a lesbian. I did not know you loved me so much. Your love is so true for me that you went bald for me?”

Watch the videos below from the press conference:

#RakhiSawant shows her VIRAL lock video to the media pic.twitter.com/1t531iyoUI

Bipasha Basu recalls the time she was…

Niti Taylor opens up about being harassed…