After setting expectations soaring with the critically acclaimed powerful trailer and soundtrack the team of Toofaan is all set to amp up the ante with a unique global takeover. With a first-of-its-kind multi-city tour for any Indian movie, the cast and crew of the movie virtually visit and interact with the press, fans, and local heroes from each of the cities in celebration of the spirit of Toofaan. Ahead of the movie’s global Hindi and English premiere across 240 countries and territories, Farhan Akhtar, Mrunal Thakur, Paresh Rawal, Rakeysh Omprakash Mehra along with Ritesh Sidhwani interacted with fans, local heroes, and press in Ahmedabad, Vadodara, Surat, Chandigarh, Ludhiana, Indore, Jaipur, Bangalore, Chennai, Hyderabad, Kolkata, Nagpur, Pune, Dubai, Abu Dhabi, Sharjah, London and New York. 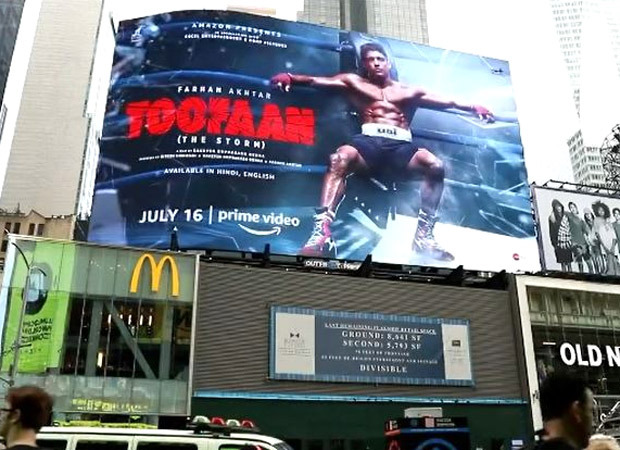 These local champions include Manna Patel —an Indian backstroke swimmer from Ahmedabad, Gujarat who has made waves in the sport and is all set to represent the country at the upcoming Tokyo Olympics in the 100m backstrokes; Arshi Khanam – a feisty pugilist from Jodhpur who’s India’s top-ranked boxer; professional boxer and coach Asad Asif Khan from Kolkata, Gaganpreet Sharma — professional boxer from Chandigarh; boxer Manju Bamboriya from Ujjain; V. Devarajan - Indian boxer and an Olympian won the bronze medal in the 1994 World Boxing Championship in Bangkok from Tamil Nadu and Sharath Gaikwad - a paralympic swimmer from Bengaluru who broke the unbeatable 28-year record at Incheon Asian. Along with them visiting the city virtually, the Toofan storm will hit multiple cities through several innovative out-of-home billboards. This includes innovative hoardings of Farhan as Toofaan; placed across prominent locations in Mumbai, Noida, Lucknow, Kolkata, Pune, and Ahmedabad as well as a digital billboard that literally packs a punch, unveiling the release date is also set up at Times Square, in the heart of New York City. Global domination indeed!