It is a known fact that the household of Rajinikanth is buzzing with joy and celebrations as the date for his daughter’s wedding is getting closer. The South megastar, just like a dutiful father, has now set out to distribute invitations for the wedding of Soundarya Rajinikanth and Vishagan Vanangamudi and has been visiting the residences of some from the fraternity. He recently was seen thrilled to meet Prabhu, actor-son of South stalwart Sivaji Ganesan. 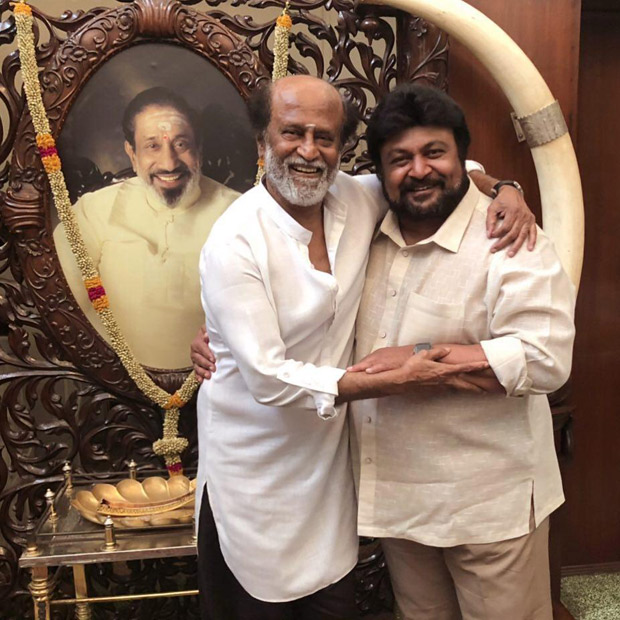 It seems that the preparations for the forthcoming Soundarya Rajinikanth – Vishagan Vanangamudi wedding have started off in full swing. Recent update on that front is that Rajinikanth decided to fulfill the responsibilities of invitations by going on and extending the invites personally to some celebs in town. Amongst them was the family of late veteran actor Sivaji Ganesan. The pictures of the same were shared on social media by the actor’s grandson Vikram Prabhu.

Vikram Prabhu posted pictures of Rajinikanth visiting their house to invite them for Soundarya’s wedding on social media saying, “A great way to start a good week ahead!#Superstar #Family #Maranamass #Always.” He added, “Love their friendship! So much love and respect for each other!#GuruSishyan #friendslikefamily #FavPic.”

A great way to start a good week ahead!???? #Superstar #Family #Maranamass #Always

If reports are to be believed, the wedding celebrations will be grand but a private affair with only close friends and family in attendance. Soundarya Rajinikanth recently confirmed the wedding by sharing a picture of her pre bridal look on twitter. The celebrations are expected to kick off from February 9 onwards, with the wedding happening on February 11. There were also reports that Latha Rajinikanth has requested for heavy security during these celebrations.

Soundarya Rajinikanth got married to Ashwin in 2010 and later, the couple got divorced in 2017. The couple has a four year old boy named Ved Krishna.

Also Read: Woah! Soundarya Rajinikanth just CONFIRMED her wedding and her pre-bridal look will leave you in awe