Clashes are here to stay and there’s no doubt on that. However, an unusual and scary situation has emerged with regards to Eid 2020. As of now, as many as three big films are all set to arrive on this festival – Radhe, Laxmmi Bomb and Fast & Furious 9. Radhe is a Salman Khan starrer and promises to be a typical masala entertainer. Salman and Eid are inseparable and hence, it’ll be a film that will surely be lapped up. Laxmmi Bomb stars Akshay Kumar and is a remake of the popular Tamil film Muni 2: Kanchana. It was to arrive on June 5 initially but was later preponed by two weeks to come on Eid. Finally, Fast & Furious 9 makers had made it clear in February itself that their film will release worldwide simultaneously on May 22. This is one of the biggest franchises in India and it’s enjoyed by both single screen and multiplex audiences. The seventh part of this brand was the first Hollywood film to cross the Rs. 100 crore mark. Hence, expectations are humongous for Fast & Furious 9 too. 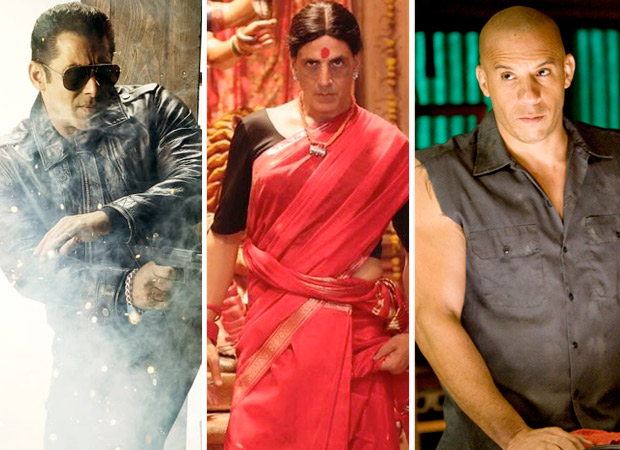 But if these three films with huge potential release on the same day, won’t there be a significant division of business? Shouldn’t this unpleasant situation be avoided? “This clash should not happen but samjhaye kaun? Aur samjhega kaun?,” says trade analyst Taran Adarsh and then adds, “More than anyone, I think it is the actors and the producers and distributors who’ll suffer. And more than that, the exhibitors will have also suffer.”

Trade analyst Atul Mohan agrees, “Two big films can be accommodated. But when you have a film like Fast & Furious 9, whose previous films have done Rs. 100 crore business, clashing with Radhe and Laxmmi Bomb, it’ll lead to a tensed situation. Eid is synonymous with a Salman Khan release. Also, Radhe seems to be in the zone of Wanted. Meanwhile, Akshay Kumar is also on a roll. Hence, it’ll lead to a tough fight.”

The three-way clash will lead to a lot of problems. Taran Adarsh explains, “Nowadays, most of the producers want to book theatres for their films for two weeks. And they are not ready to share the screen space with anyone. And all three are event films. The Hindi films have big names while the Hollywood film is a big franchise with a huge following among the youth in India. So it’ll be one a big khichdi I feel!” Girish Johar, film trade and business analyst, opines, “All three films are big and are commercial masala entertainers. If they clash, there will be a fight for screens and showcasing. And audiences will also be divided for sure. Not to forget, Fast & Furious 9 will release in various languages as well.” Atul Mohan also feels the same, “Screens ki maara maari toh hogi hi, but even audiences will get divided. Audiences today can’t afford to watch three films in a week. At the maximum, they’ll watch two films out of three.”

Trade analyst Amod Mehra meanwhile explains in detail, “More than six months are left. Among the three films, one is as good as not even started – Radhe. We have to first wait and watch whether all three of them make it on time on Eid. A big film releasing solo is always a perfect scenario. A big film and small film releasing together can also work. But not three! Three is always a crowd, whether the films are small or big. Hence, if three films clash, then it’s suicidal. The business will be dented in multiplexes and today, 70% of the revenue of a film comes from multiplexes. And it’ll be a case of might is right. Whoever will have the bigger distributor, he’ll secure the screens. It all boils down to who has the required distribution power and not better content.”

So is there any chance that one out of these two films will bow down of the race? Akshaye Rathi, film exhibitor and distributor, says that he is “200% sure that Fast & Furious 9 will arrive a week before”. He tells, “If you remember in 2012, The Amazing Spider-Man had preponed and it had come a week before to avoid clash with Bol Bachchan and S S Rajamouli’s Eega. Similarly, The Jungle Book’s release was advanced by a week prior to Fan. Similarly, Fast & Furious 9 will also arrive a week before. The Hollywood makers have realized that India has become an important market – it comes under the top 7 markets globally. Hence, it makes sense not to clash with two big films. Earlier, Hollywood used to be hesitant because of the belief that piracy emerges from India. Now it has been proved that its countries like Pakistan and Malaysia from where the films get pirated.” But with the holy month of Ramzan going on, won’t that also affect the prospects of Fast & Furious 9? “Beyond a point, it won’t really matter. Even Baahubali’s first part had released during Ramzan. And Fast & Furious 9 is a film that will, irrespective of everything, will do what it has to do. It has become a set franchise and gets a certain number for sure,” he says.

Girish Johar too is of the same opinion, “I feel that Fast & Furious 9 might go a week ahead or back. If you see, the upcoming James Bond film No Time To Die is scheduled to release worldwide on April 10 but to avoid a clash with ’83, they have preponed it by a week.”

If Fast & Furious 9 indeed moves away from the clash, trade pundits will still be concerned thanks to the clash of Radhe an    dia not from the actors but by their fans. The reports in the bargain get affected, at least initially. Of course, the word of mouth prevails. Having said that, I feel this is not a healthy trend”, exults Taran Adarsh before signing off.