Priyanka Chopra surely has had a whirlwind romance with American popstar Nick Jonas. The couple got married after a few months of dating. While they have completed six months since their marriage, they are still learning something new about each other. Priyanka Chopra is the cover star of Elle UK in which she talked about her life after marriage, how she bonded with her sisters in law Sophie Turner and Danielle Jonas, her friend Duchess of Sussex Meghan Markle and more. Though Nick and Priyanka have 10 year age difference, they bonded over their family values. The actress revealed that they planned their wedding in one and half month. "We decided on the venue for our wedding in October and we got married on 1 December. We had one-and-a-half months to plan, so we were just like, 'Yeah, yeah, yeah, let’s get it.' And suddenly we were like, 'Ohhh god.' It was very extravagant. Hopefully, you just do it once. So it’s fine." 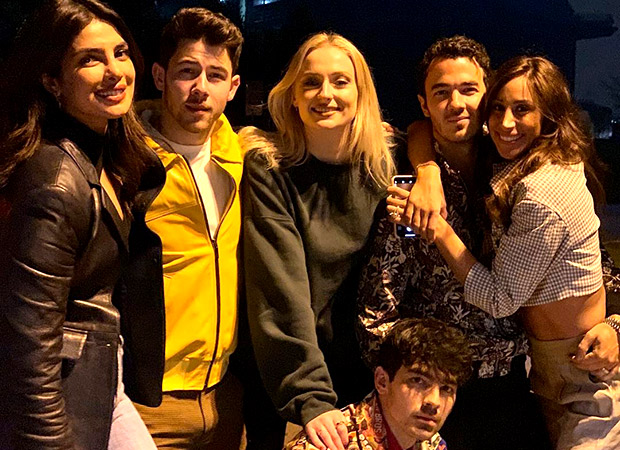 Priyanka said that things are so different. "It’s so different. I’d never realized having a husband and a boyfriend are such different things. When you say your vows, it’s like, this person is my family, and it’s the family I chose. There’s a weird responsibility to them. And a safety that comes from it. We are learning about each other every day."

Priyanka even talked about her sisters in law Sophie Turner and Danielle Jonas with whom she shares special bond. "I’ve never had a sister, so it’s really nice to have Danielle and Sophie, and just inheriting the family by proxy. Sophie is super talented, super funny and we have the most fun when we go out together," Priyanka said.

She also talked about her friend, Duchess of Sussex Meghan Markle who recently gave birth to baby boy Archie. "Megs... she was always meant for big things. To be a change and be an important voice in doing that. It’s amazing that she found that calling and has the platform to be able to do it," Priyanka said.

"By the time this comes out, she will have a baby [Archie Harrison Mountbatten-Windsor was born on 6 May] – it’s so amazing how lives change. I’m a big believer in taking charge of your life, but there’s got to be something bigger that puts us into the circumstances that we are put in. Destiny has a weird way of helping you to find your calling," she added.

While Nick and Priyanka live in New York and Los Angeles, they also want to buy a house in London someday. "Nick and I want to get a place in London at some point. Whenever I go there, I feel connected to the city."

Priyanka further talked about how over the years she has become more comfortable in her skin. "It started happening to me in my early 30s; I got weirdly comfortable. I was like, this is me – take it or leave it. I really wish I could’ve told my younger self, “Don’t be worried about your flaws”,’ she says with an enviable air of wisdom. I won’t deny, I care about the vanity. I’m in the business and I want to look the best that I can, but that’s the key term: the best that I can. I’m not 21; I’m not going to try and look it! My body is changing, my body looks different," she said.

Priyanka Chopra is the first mainstream Indian actor to successfully venture into Hollywood. Talking about the same, she said, "I realised that South Asian actors get put into a box. As soon as you say you’re a Bollywood actor, all I’m expected to be good at is dancing and big, theatrical acting. So I thought, the way to make a dent would be to not play Indian characters at all."

On the work front, Priyanka Chopra will star in The Sky Is Pink. The film is helmed by Shonali Bose and stars Farhan Akhtar and Zaira Wasim.