A terrifying massive explosion ripped through Lebanon capital Beirut on August 4, 2020, that led to the deaths of over 70 people and injured thousands of citizens. President Michel Aoun said that 2,750 tonnes of ammonium nitrate that are used in fertilizers and bombs had been stored in the warehouse for six years at the port without any safety measures. 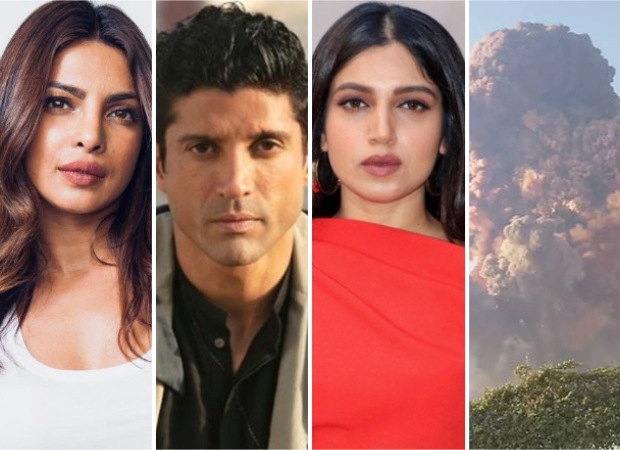 Lebanon’s Prime Minister Hassan Diab, said in a televised speech, “I promise you that this catastrophe will not pass without accountability. Those responsible will pay the price. Facts about this dangerous warehouse that has been there since 2014 will be announced and I will not preempt the investigations”.

Bollywood celebrities including Priyanka Chopra, Farhan Akhtar, Bhumi Pednekar among others are praying for Lebanon, deceased and their families, and thousands of people who were injured in this grave crisis and hoping that they recover from it soon.

This is awful. Absolutely devastating. Sending all my love and prayers to everyone affected by this tragedy. #Beirut ???????? https://t.co/xNVA3KLWRC

When your mind does not want to believe what your eyes have just seen. #Beirut and it’s people in my thoughts .. ????

This sent a shiver down my spine. So devastating.Our condolences are with the people of #Beirut.We are praying for you ????
2020 can’t imagine it getting any worse. https://t.co/hO8g5NYAXZ

This is such heart-wrenching news. Shattered seeing such mass devastation. My thoughts goes out to all the affected in #Beirut. My sympathies and prayers are with the people of #Lebanon #GodBlessBeirut

The Beirut blast looks absolutely terrifying. I hope the city and its people recover soon.

Unreal news and footage coming in from Beirut. Prayers and deepest condolences for all those affected by the #BeirutExplosion.

Hey Bhagwan! What is this explosion in #Beirut?! Prayers for the people there! #wtf

'My character breaks all the tags associated…

Bhumi Pednekar does a temple pilgrimage…