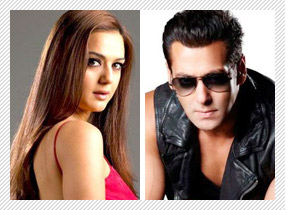 Salman Khan had a surprise guest at Yash Raj Studios where he was doing interviews for his upcoming film, Ek Tha Tiger, yesterday. It was none other than his co-star, Preity Zinta who is making a comeback with Ishkq In Paris.

When asked about the purpose of her visit, Preity reveals, "I came here to show my film's trailer to Salman and take his feedback. I have always valued his opinion." Preity who has also turned producer with this film informs that she was there because the film's trailer is being cut at YRF studios. When she found out that Salman is also at the studio she dropped by to meet him.

So what was Salman's feedback? Preity who waited for almost an hour informs, "Salman seems to be very busy tonight. I haven't been able to show him the trailer. I am planning to go to his place tomorrow as his feedback is very important for me." Palpably nervous, she adds, â€œI hope he likes it. I don't know what he is going to say?â€

Is she enjoying her new role of a producer? "Not at all. It's such a thankless job. The worst thing is that I have to sign countless times. Today I have signed nearly 200 cheques. My hand was paining after a while. I asked my mom, 'Can't I put my thumb impression instead of signing? It will make life much easier'. My mom didn't know how to react at my stupid idea," Preity quips.