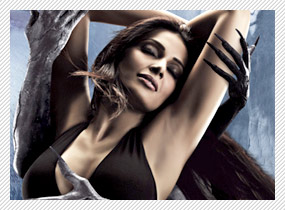 Last couple of days have seen Ameesha Patel's name being dragged into the promotional campaign of Raaz 3. While it has been made to believe that the film is based on her real life story with Vikram Bhatt, it has been hinted that Bipasha Basu is actually reprising the role of another has-been heroine who faded away in the early 80s. If sources are to be believed, case files have indicated that this ex-actress was rumoured to be indulging in black magic. Since 'jaadu tona' also happens to be the theme of Raaz 3 with Bipasha enacting the role of a fading superstar, one has all the right reasons to be suspicious.

"Yes, this indeed is the case", informs our source, "There were number of stories that writer Shagufta Rafique was contemplating for the Raaz franchise. However during her research, she came across this literature that detailed the case of a heroine who was said to be indulging in black magic. She was immediately intrigued and started digging down the archives. She was shocked with what she discovered and immediately brought this to Vikram Bhatt's notice."

For the director too, it was nothing less than shocking. Since he has made quite a few horror films in the past, this case study seemed quite intriguing for him to explore as well.

"However he didn't want Bipasha's character to be based just on one actress' tale from the past", adds a friend of the director, "That may have not just become quite one dimensional but also pretty blatant. The idea was not to dig a grave or bring out skeletons from the past. So while in Raaz 3 there are quite a few anecdotes taken from the actress' life, there isn't any direct reference made, lest it turns out to be overtly controversial."

No wonder, the makers are neither in mood to name the heroine nor confirm if she is dead or alive.

Says Vikram, "See, we all have heard about certain celebrities practising black magic, especially from the era gone by. Quite a few heroines have been accused of that. However, no one has seen anyone doing it even though the grapevine has been strong. It is Shagufta who did her research and brought to me certain instances. I was shocked but definitely not surprised. It fitted well with the characterization of Bipasha as well and we have now played along with that."

Here is hoping that ghosts of the past do not end up disturbing Bipasha.