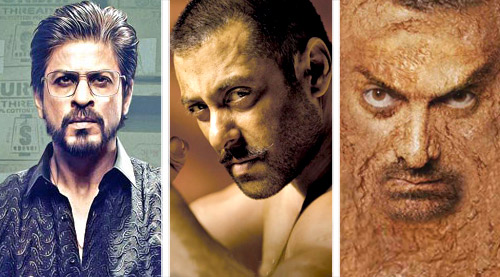 Last year we had predicted a few likely entrants into the highly exclusive Rs. 100 crore club, this year we do the same but with a difference. While last year's predictions were based on the results of the Most Awaited Movies poll, this year we at Bollywood Hungama quite literally are sticking our necks out vouching for these films, which in all likelihood will be big money spinners at the box office.

So quite literally putting our reputation on the line, here are the films that we expect will be making it big at the box office in 2016. However, this year we have further categorized the film into segments based on their estimated box office collections.

1. Raees: Though the film featured in our list last year as well, Raees which is produced by Farhan Akhtar and Riteish Sidhwani's Excel Entertainment featuring Shah Rukh Khan will see the light of day this year. However the film might face competition with rumours of Raees clashing with the Salman Khan starrer Sultan releasing on the same day. If this rumours holds true though it won't spell disaster for either of the films, it will certainly dent both the films overall box office collections.

Another factor that might affect the overall box office collections of Raees is the fact that the film features a Pakistani actress, Mahira Khan, in the lead role opposite Shah Rukh Khan. Though this may not seem like an issue with the prevalent though process of certain elements, the makers of Raees may fact problems with Mahira promoting the film on Indian soil.

But all said and done, at the end of the day considering Shah Rukh Khan's immense marketing prowess and of course his second to none fan following Raees might just turn out to be this year's highest grossing film.

2. Sultan: Salman Khan featuring in a Yash Raj production is more than enough to grab our attention. Now add to the cast the inclusion of Anushka Sharma, which just makes Sultan a sure shot box office winner.

However in comparison, though Sultan will be a money spinner, it is more likely to follow the Shah Rukh Khan starrer Raees in terms of overall box office collections coming in second.

3. Dangal: Aamir Khan's one film a year policy ensures that the actor focuses and gives it his all when filming, however with no release last year and an insane amount of anticipation surrounding the film Dangal will certainly be big. Though the film is still a long way from release and by the time it does release, we wonder if the audience or certain elements that comprise the theatre going audience will remember the 'intolerance' statements made by Aamir. In case they do, Aamir's Dangal might in all likelihood face a crunch at the box office with people opting to stay away.

Keeping the above factors in mind, we feel that despite Aamir not featuring in a release since 2014, the actor's film will rank third in terms of overall box office collections following Shah Rukh Khan's Raees and Salman Khan's Sultan.

4. Fan: Marking the reunion of Yash Raj Films and Shah Rukh Khan after the 2012 film Jab Tak Hai Jaan, Fan that commenced shooting a while back made headlines when SRK's look in the film was revealed. Directed by Maneesh Sharma, the film will feature SRK playing a double role, one being that of a reigning superstar, and the other a lookalike. However, unlike the usual Shah Rukh Khan starrer Fan which features a somewhat atypical storyline and hence may find obstacles at the box office.

5. Mohenjo Daro: Hrithik Roshan featuring in a period drama helmed by Ashutosh Gowirikar will certainly be worth the wait. Though not much of the film is known, it makes the list of possible Rs. 100 crore club entrants.

6. Ae Dil Hai Mushkil: Said to be a romantic film written and directed by the king of romance Karan Johar Ae Dil Hai Mushkil that features Ranbir Kapoor alongside Aishwarya Rai Bachchan and Anushka Sharma is certainly one of the most awaited film this year. However, with the last film that featured Ranbir Kapoor and Anushka Sharma, Bombay Velvet not performing as expected at the box office, coupled with the fact that Aishwarya Rai Bachchan's highly anticipated comeback venture Jazbaa turned copper at the box office, we wonder if Karan Johar will be able to work his magic for the trio.

7. Shivaay: The film which marks Ajay Devgn's second directorial venture after his debut as a director with the 2008 film U, Me Aur Hum, has been keenly anticipated. Though not much of the film's story is known, Ajay has been pretty vocal about it being his magnum opus.

8. Hera Pheri 3: Continuing in the Hera Pheri series the third installment will most likely be on the same lines as the earlier two with the central theme of the lead trio trying to amass a fortune. Though details on the cast and production are unknown, we guess the film will work.

9. Airlift: Based on one of the most ambitious, dangerous and successful evacuation stories, Airlift that releases around Republic Day certainly has the desired amount of action, drama and nail biting thrilling sequences to make it pretty popular. Add to that the film will release around Republic Day when nationalist and patriotic themes run high among the audience, Airlift is a sure shot hit.

(NOTE: This article was conceptualized in the first week of January, before Airlift released, hence we have retained the same in the list.)

10. Rustom: Though the only thing known about the film is the fact that Akshay Kumar will essay the lead role, and that the film will be based on a real life incident. However, with Rustom that is co-produced by Friday Filmworks, Zee Studios and KriArj Entertainment, is written by Vipul Rawal and directed by Tinu Suresh Desai slated to release on Independence Day we guess the romantic thriller will revolve around a similar theme as Baby, Special 26 and Airlift.

However, with business tycoon Anil Ambani deciding to join hands with the makers of Rustom, to finance the project, the film will have an added advantage with more backing in the finance division ensuring better production value and a larger release.

11. Rock On 2: Continuing from where the first film left off, Rock On 2 will take the story forward after the demise of Luke Kenny's character. Featuring Farhan Akhtar, Shraddha Kapoor, Arjun Rampal and Purab Kohli the sequel to the highly successful Rock On, is keenly awaited.