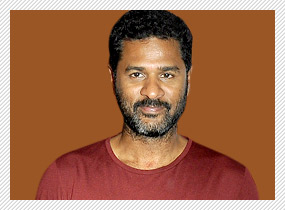 R... Rajkumar may have been panned by critics all over with some of the most scathing reviews coming its way. However if the weekend gone by at the box office is anything to go by, audience isn't really minding the 'masala' packaging of 'maar maar maar' and 'pyaar pyaar pyaar'. The captain of the ship, Prabhu Dheva, got a dose of that himself when a complete stranger walked up to him and said something to him that was so unique that it turned him all emotional.

"As the end credits started rolling, this man - who was perhaps in his 60s - tapped Prabhu Dheva's shoulder from behind and said - 'Your direction has certain rhythm to it'. Now Prabhu Dheva has been in the industry for around two decades and heard appreciation and received accolades in various kind of expressions. However, to have a commoner pointing out something like 'rhythm' in the manner of storytelling was unique for him too. Naturally, he was speechless," says a close associate of the filmmaker.

Known for his 'masala' streaks, as demonstrated in Wanted as well as Rowdy Rathore, the filmmaker has been picked by a large section of media for overdoing the act. However, with collections being steady right through the weekend, especially in single screens and the mass centers, Prabhu Dheva is happy to keep his target audience satiated.

"Isn't this what that matters at the end of the day," questions the filmmaker, "My producers (Eros) are happy, my actors (Shahid Kapoor, Sonakshi Sinha, Sonu Sood) are happy and then a common man has come and said something good to me by picking on the nuances that even I as a filmmaker didn't think of consciously. These are good enough reasons to be content with the film."

On being asked about excessive 'maar' in his films, hence resulting in an overdose of 'masala', Prabhu Dheva said, "You pick up any typical Indian movie and there would be emotions, comedy, songs - just about all elements of a 'masala' entertainer. It is just that some of these films don't have fights while I bring them in a little extra."

After this experience at Gaiety cinema, he had a similar response from audience as well as staff in Chandan as well who were excited enough to give him a thumbs up.

"The single screens have reacted quite well to the clap trap moments, especially around the interval and the climax. My next stop is to watch the film with multiplex and see how audience there reacts," he shares his plans before signing off.