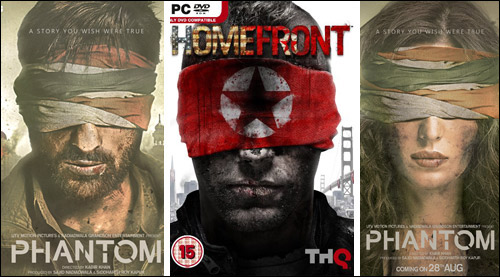 Just yesterday the latest posters of Kabir Khan's next venture Phantom featuring Saif Ali Khan and Katrina Kaif went viral. While most have been admiring the stunning first look of the film, we noticed something different. In fact the posters that feature the lead pair of the film blind folded with colours that resemble the National flag, bears a striking similarity to a game DVD cover that released back in 2011.


While the cover of the game Homefront features the main protagonist sporting a red blindfold symbolic of North Korea, the story of the game traces the duration of a resistance movement fighting against a near-future foreign military occupation of the Western United States. On the other hand, Kabir's Phantom is a post 26/11 political thriller that is more like a counter-terrorism drama, with Saif Ali Khan roumoured to be playing a spy and Katrina Kaif a photo journalist.


While still talking about the blindfolds on the Phantom poster, we also hear that the original image featured the 'Ashoka Chakra' on it completing the look of the bandana resembling the National Flag. However the censor board objected to this portrayal and had asked the makers to remove the same.


Produced by Sajid Nadiadwala, Phantom is based on author Hussain Zaidi's novel 'Mumbai Avengers', and is scheduled to release on August 28.