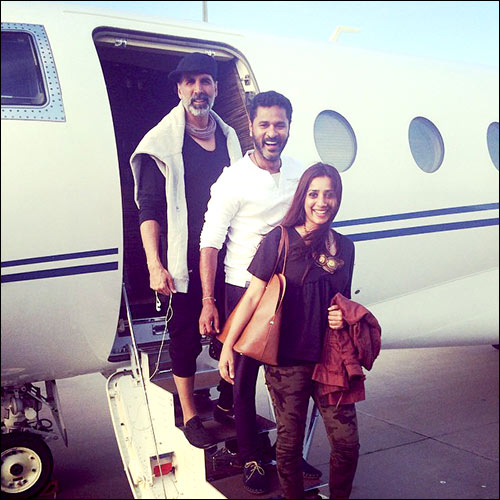 Readers may be aware that Akshay Kumar has kick started the shoot for Singh Is Bliing in full swing and the crew is constantly travelling to different picturesque locations to wrap the schedule of film. Now, the film crew has shifted to Cape Town where they will continue shooting for the film.

Producer Ashvini Yardi recently took to Twitter to talk about their journey to the South African city. Reminiscing about her previous shoots in the location, she posted this picture of director Prabhu Dheva, Akshay Kumar and herself, arriving in the city, saying, "Always good to be back in Cape Town #singhisbliing #southAfrica."

Also, revealing about her fun filled journey, she shared another picture from their flight, saying, "The crazy trio of #singhisbliing playing snakes n ladders on a private jet #capetown."

Singh Is Bliing also stars Amy Jackson, Lara Dutta in prominent roles and is slated to release on October 2, 2016.

Amy Jackson spices up the lockdown with a…

Disney + Hotstar’s claims of Laxmii being…