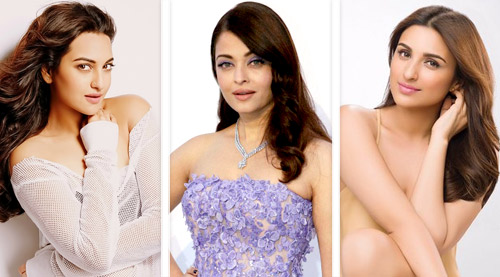 Woman power seems on the rise in Bollywood. 2016 started on a high note for women's empowerment when Neerja, a true-life account of a female hero became a surprise hit. Followed Jai Gangaajal, a loud and gruesome clarion call for women in khaki to take scummy politicians. The year has other films lined up where women are given a plotted predominance.

1. Haseena: Sonakshi Sinha plays the real-life role of alleged underworld gangster Dawood Ibrahim's sister, apparently an outlaw herself. Her life and death were stuff that gangster celluloid epics are made of. Director Apoorva Lakhia is fully into helming the hijinks of this colourful personality. Sonakshi Sinha gets into the skin of the role, added kilos and all.

2. Sarabjit: Though this film is named after Sarabjit Singh, the Indian who was convicted and killed for being an Indian spy, the film focuses on his sister Daljit's struggle to get her brother freed. As a rural Punjabi woman, it is complete makeover time for Aishwarya Rai Bachchan. Omung Kumar, who directs Sarabjit earlier helmed the Mary Kom bio-bic.

3. Cabaret: Pooja Bhatt directs Richa Chadha in this tribute to women who take to the floors to sizzle and seduce in clubs. Pooja says this is her tribute to Bollywood's ultimate cabaret queen Helen. Richa learnt the ropes of cabaret dancing to get into the soul of the role. Let's see how far she gets to the core of the theme.

4. Simran: After two back-to-back intense male-dominated films based on the lives of real life characters Shahid and Aligarh, Hansal Mehta is all set to direct Kangna Ranaut in a feisty film about a Gujarati NRI in the US. Again, it's a film based on a true-life character. Kangna has been heard going to town about how much she admires 'Hansal Sir' after watching Aligarh. She needs a third author-backed hit after Queen and Tanu Weds Manu Returns to complete her trilogy of
I-me-myself triumphs.

5. Akira: A full-on action film by Telugu director A. R. Murugadoss, where Sonakshi Sinha not only plays the title role but she also steps into a territory so far largely restricted to the male bastion: the action genre. Apparently, she has trained for the action scenes and is all set to dazzle with her kickass skills.

6. Meri Pyaari Bindu: Parineeti Chopra missed out on playing 'Piku'. Never mind. She is all set to make up for lost time with new director Akshay Roy's film where Parineeti plays a singer. Since she belongs to a family of singers (please check out her cousin Priyanka Chopra), Parineeti is very excited about the opportunity to flex her vocal chords and show the world her newly revamped physique.

7. Kahaani 2: Vidya Balan's recent female-centric films have under-performed. But, she is back in a strong author-backed role in Kahaani 2. It was Kahaani in 2013, where her journey towards becoming one the contemporary female hero's actually began. Let's hope Vidya regains lost glory with the sequel to Sujoy Ghosh's intriguing yarn.