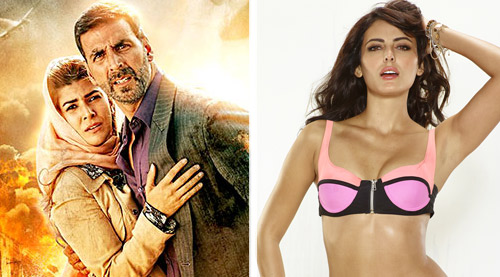 Films clashing with each other on the big screen is nothing new, with ever filmmaker worth his salt working overtime to ensure his film releases

on a favourable weekend (read: extended weekend) that is conveniently around a national/ public holiday it is common place to witness more than one release. This was

exactly the case yesterday with two films viz. Airlift and Kya Kool Hain Hum 3, though varied in genre, going head to head at the box office. While

Airlift that features Akshay Kumar and Nimrat Kaur is based on one of the largest human evacuations in recent history, Kya Kool Hain Hum 3 that

features Tusshar Kapoor, Aftab Shivdasini and Mandana Karimi is said to be India's first ever 'Porn-Com'. Though both films released on Friday, Airlift has

collected Rs. 12.35 cr on opening day, while Kya Kool Hain Hum 3 has managed to collect Rs. 8.15 cr in the same time period, showing that patriotism has


Coming to the USP of each film, Kya Kool Hain Him 3 that is the third installment in the hit franchise Kya Kool Hain Hum certainly has a massive target

audience, add to this Tusshar Kapoor and Aftab Shivdasani teaming for the triquel with Riteish Deshmukh making a special appearance and the addition of the sultry

beauty Mandana Karimi who has quite literally set the small screen on fire with her appearance in the popular show Bigg Boss. Coupled with this is the fact that the

film is being produced under the banner of Balaji Motion Pictures, whose track record in the recent past has been impeccable, with most of their releases pleasing

not just the viewers but also the makers with a high Return on Investment rate. On the other hand, the second release Airlift that is directed by Raja Kishna

Menon features Akshay Kumar whose previous releases have been highly successful at the box office alongside the talented and beautiful Nimrat Kaur. Now add to this

the fact that Akshay's previous releases that featured a somewhat patriotic theme viz. Baby and Holiday struck a chord with the audience making Akshay

not just any other action hero, but instead an action hero who features in content heavy films worth watching. However, last but by no means the least,

Airlift that tells a touching story is being produced by the music giant T-Series.


Well now that we know what each film has to offer, we have to mention each of the film's critic verdict. In an age when audiences are more prone to watch a film

based on its reviews and word of mouth, Airlift that not just please the audience but has received rave reviews from critics across the board. However, Kya

Kool Hain Hum 3, despite boasting of massive promotions and hype has garnered less than appreciative reviews from the critics. Though at the end of the day it is

the audience who will effectively make or break a film, Airlift seems to have the upper hand when it comes to box office collections as compared to Kya


Another factor that plays an important role in any films over all box office success is the placement and release date of the film. Here again Airlift will

have the upper hand thanks to the release of the film around the national holiday of Republic Day. With this holiday falling on the first Tuesday after release

expected to sweep the nation like always. While the midweek holiday will also give a boost to the other release, on a comparative note Airlift that fits the

patriotic theme to a 'T' is more probable to be the theatre going audiences' first choice.


On the whole, it is safe to say that in the war of patriotism vs porn-coms, it is patriotism that wins. In fact, reports from across the country predict the final

collections of Airlift are likely to be close to if not almost double of Kya Kool Hain Hum 3.