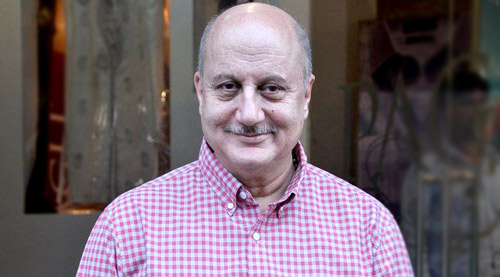 "With such a prestigious recognition from the Government comes a great responsibility," says actor-author-activist Anupam Kher who has been awarded with the Padma Bhushan by the Indian government.


Kher, who until recently accepted all sorts of film roles including slapstick comedies has lately been saying no to lowbrow entertainment. Recently, he turned down Kya Kool Hain Hum 3 after being a part of the first two films in the series.


Says Anupam, "Yes, I did say no to the film you mention. But it's not because I've stopped enjoying lowbrow comedies or any other genre of mass entertainment. It's just that with time I've outgrown the need to be seen in every kind of cinema. I am comfortable doing massy cinema. But the audiences are not. Sometimes it is important to live up to people's expectation along with your own."


The actor who has lately been battling cynical remarks about an 'Intolerant India' says he feels the change within himself. "I feel the change and the growth in me. My work, my various activities give me my identity. 90 percent of what one does is monotony. It's that other ten percent which gives meaning to one's existence. My father, a clerk in the forestry department spent 35 years of his life doing the same work every day. He would wake up at 7 am and get ready for work with the same enthusiasm every day until he retired. I imbibed the sense of discipline and dedication towards my work from my father. I therefore dedicate my Padma Bhushan to my father."


Without naming Karan Johar, Anupam Kher criticizes the filmmaker-socialite for his recent comments on intolerance and a lack of freedom of expression in India. "For people who move around in high-end cars with bouncers and security guards, to even mention intolerance is ridiculous. To say freedom of expression in our country is a joke, is the biggest joke of all, as those complaining are the ones who have never known a day's curb or check on their freedom."


During the coming year, Anupam promises to do the kind of work that would take him further ahead on the road to self-realization. He is very close to signing another major Hollywood film.


Says Anupam, "I did ask David Russell why I was not part of Joy. He said he didn't want to waste me. I agree with him. I don't want to be wasted in anything I do."