So far October has been the best month for voracious OTT consumers. There was so much to watch, talk, discuss and take offense to that it was awesome fun. Festive periods have often seen a burst of content at the cinemas but now that we are devouring streaming content for months, they have lived up to the celebrations as well. If there were guns and roses with Mirzapur 2, there was also the sweet and heart-warming anthology series Putham Puddu Kaalai, a Malayalam movie. If the Trials Of Chicago 7 left us zapped, Scam 1993 reminded us of the times when Harshad Mehta got away with a lot of cash. 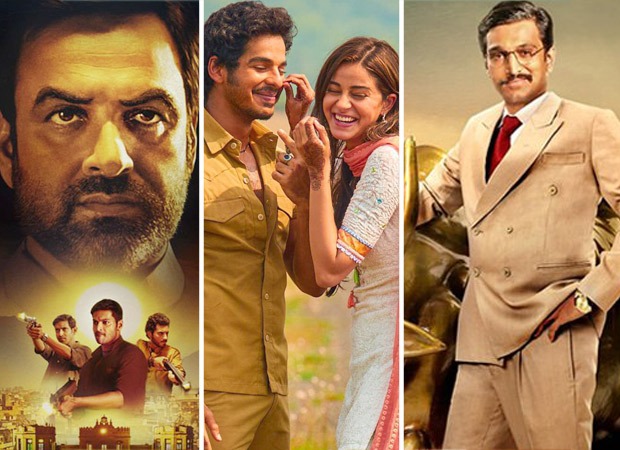 But not everything is bed of roses, OTT content in October wasn't either. Khaali Peeli saw a straight to ZeePlex release and was a huge dampener while Ginny Weds Sunny turned out to be basic. To give you an idea of what became a hit and what flopped this month, here's a list:

Nishabdham - Amazon Prime Video
This Madhavan-Anushka Shetty thriller could have been eclectic but ended up being lazy and long. It should come with a disclaimer: watch it at your own risk.

Khaali Peeli - Zee Plex
Khaali Peeli was the October 2 release on Zee Plex. To be fair, it was engaging in parts but for Rs 300, I don't want to be amused in bits and pieces. It did have a fresh pairing of Ishaan Khatter and Ananya Panday but there's hardly any chemistry between the two.

Serious Men - Netflix
This Nawazuddin Siddiqui starter bares a racket that many of us experience everyday but don't see it as problematic. A brilliant premise, some really good acting and an applause-worthy climax!

Bad Boys Billionaires - Netflix
Finally the controversial docu series on the billionaire thieves of India hit the streamer minus the Ramalinga Raju scam. Vijay Mallya, Subroto Roy and Nirav Modi did make for an interesting story but it lacks depth as it hardly explores what made them big and bad. They do get the billionaire bit right!

Bahut Hua Samaan - Disney+Hotstar
Yet another series attempting to lure the young urban and rural demography of the OTT audience but doesn't make a good impression. If you could score brownie points for just the presentation, Bahut Hua Samaan can be a case study. Rest everything is usual stuff that you see in a lot of series and movies.

Expiry Date - Zee5
One thing that OTT assures us is fabulous performances as it is still away from the star game. Expiry Date breaks that myth too. Abhorring performances by the cast makes it an unbearable watch, even when the plot is promising.

Ginny Weds Sunny - Netflix
It pains to see that the movie that has Vikrant Massey playing a light-hearted easy-breezy character is so basic. It's about a guy who crushes on a popular girl and tries to woo her with a lot of help from her mother. No surprises there!

Evil Eye - Amazon Prime Video
This has Priyanka Chopra associated with it and after watching it, we could only ask 'Why?' It's boring, dull and painfully long and this is supposed to be a thriller.

Putham Pudhu Kaalai - Amazon Prime Video
This Malayam anthology series is perhaps what we need today. Some emotions, some tears and a whole lot of feel-good...a must watch!

The Trial Of Chicago 7 - Netflix
If you haven't watched this yet, please do because we don't know if there has been any better English biopic in recent times. It will surely pick some nominations at the Oscars next year. Before that happen, watch it and get washed over by the geniuses of Aaron Sorkin.

Comedy Couple - ZEE5
Comedy Couple could have been so much more as it had a novel idea of a live-in couple doing stand-up comedy together. But apart from a striking chemistry between Saqib Saleem and Shweta Basu Prasad, there's nothing to write home about.

Mirzapur 2 - Amazon Prime Video
The sequel to this explosive series ended up being meme. People have been asking for it at random places and is a recurring joke. Finally it streamed and got mixed reactions.

A Suitable Boy - Netflix
This Mira Nair series is an adaptation of Vikram Seth's bestselling book by the same name but the effect is hardly the same. The six episode arc seems rushed and some characters are underdeveloped. It gives you a rather half-baked experience, especially if you have read the book and are a fan of it.

Taish - Zee5
A Bejoy Nambiar thriller is always profound. Conflicted characters, complicated narratives and stylised presentation...he knows how to get attention. Taish manages to live up to that expectation but does have the usual Nambiar flaw of being underwhelming at last.

Also Read: 13 most popular & HILARIOUS Mirzapur 2 meme templates; which one is your most favourite?