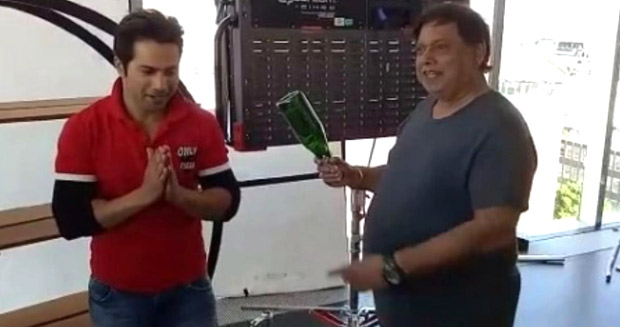 Varun Dhawan has been keeping busy with the shoot of his comedy film Judwaa 2. The film was recently wrapped up in London after an almost 2-month long shoot. The cast and crew had a gala time shooting and the behind the scenes photographs and videos are a proof of it.

In a funny video, filmmaker David Dhawan is seen smashing his son’s Varun Dhawan’s head with a bottle. The 12 seconds clip showcases how cute their relationship is. Varun shared a video and wrote, “#4monthstojudwaa2. The director says "he's been a naughty actor but a good actor" then smash. Check out the madness as the countdown begins #judwaa2 sept29th.”

While breaking the bottle on Varun's head, David Dhawan says, “He’s been a naughty actor but a good actor.”

Judwaa 2 is helmed by David Dhawan. The film also features Jacqueline Fernandez and Taapsee Pannu in lead roles and is scheduled to release on September 29.

#4MonthsToJudwaa2. The director says Iv been a naughty actor but a good actor and then... Watch the video. Just 4 months left. pic.twitter.com/w6lCOt8URu