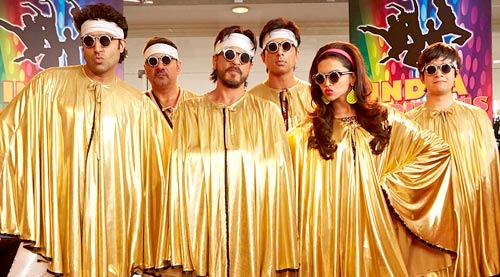 Film lyrics can abound in a lot of madness. In the last 20 years, as Govinda shrewdly observes, film lyrics have become much more conversational and therefore much less poetic than before.

'I Am Feeling All Right / It's A Nonsense Ki Night' (Happy New Year) is the latest example in showbiz's 'mad lyrics' gallery. In some of these cases, there is a definite method to the madness and this song, written with a pure sense of fun by Farah Khan herself with her composers and lyricists Vishal-Shekhar, also falls into this category.

The song puts together several famous Hindi proverbs and translates them into English - literally and usually in the order of words. The result is screwball funny, so 'Jiski Laathi Usski Bhains' (the desi way of saying 'Might is right') goes 'Whose is stick, his is buffalo'! In another fun translation, 'Tu Sher To Main Sawaa Sher (If you are smart, I am smarter') twists sher (an Indian measure of quantity) into its commoner meaning of 'tiger' and so the words become, in broken English, 'If you tiger me tiger and quarter!'

The ad-lib-like phrases in the prelude to the hit 'Hawa Hawaii' (Mr India), according to singer Kavita Krishnamurthi Subramaniam, saw everyone present at the recording, including composers Laxmikant-Pyarelal, producer Boney Kapoor and even the musicians, coming up with a related string of nonsensical terms before the main song began.

Encouraged by the song's success, a variant was tried by the same team in their next film Roop Ki Rani Choron Ka Raja in 'Chini Mein Chai', in which the alliterative lines 'Chandi ke chacha aur chachi Chandi Chwok mein chate chatni', a phrase based on three Mumbai localities, 'Dongri Wadala Matunga' and other gimmicks added to the nonsensical mukhda, 'Chini mini ching chong chini mein chai' in a song placed in a 'con' situation within the film.

Similar nonsense was penned in the cult song, 'My Name Is Anthony Gonsalves' (Amar Akbar Anthony) in which Amitabh Bachchan recites nonsensical English in the beginning of the song that have now become a cult prelude: 'Wait! Wait! Wait! You see the whole country of the system / Is juxtaposition by the haemoglobin in the atmosphere / Because you are a sophisticated rhetorician / Intoxicated by the exuberance of your own verbosity'. Bachchan delivers these lines with style in a frock-coat, as he, complete with a monocle, steps out of a giant Easter egg!

It is said that the last sentence was almost an exact replication of a speech in the British Parliament by Prime Minister Benjamin Disraeli in 1878, while referring disparagingly to a colleague!

Another crazy song that comes to mind is Rajendra Krishan's crazy 'Gaana Na Aaya Bajaana Na Aaya' from the 1957 Miss Mary. The song swings across lyrical and musical tangents as Kishore (also the hero) even sings part of the song deliberately off-key to demonstrate his inability to learn singing. The mad lines include lyrics like 'Kaash main jaa saktaa London / Hello Sarah, how are you /Seekh ke aata wahaan se violin / Three blind mice / See how they run'!

Of course, one cannot forget the genius of Anand Bakshi as he wrote an entire song made up of old Hindi film titles that made complete sense - the classic 'Mere Jeevan Saathi Pyar Kiye Jaa' in Ek Duuje Ke Liye. The song had a subtle but powerful point to make - that those who could not speak proper Hindi (like the South Indian hero who sang the song to woo his North Indian heroine) did watch Hindi films and knew the meaning of their titles.

Yes, in Hindi film songs, madness can be, crazily, a foundation for substance.