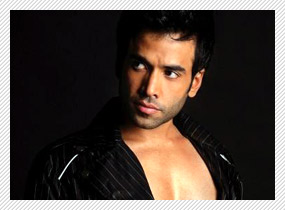 From the world of Golmaal, Tusshar Kapoor is finding himself into another franchise Kyaa Super Kool Hain Hum. While the second installment would now decide how far would the franchise go, Tusshar is confident that his hilarious adult comedy affair would find good acceptance amongst the audience. With the verdict waiting to be out on the film's eventual performance at the box office, Tusshar is sounding as positive as it gets.

So shall we expect Kyaa Super Kool Hain Hum to be as outrageous as it gets?
(Laughs) Well, we have left everything to your imagination. As the genre demands, the film has its dose of 'utt-pataang' things while being naughty and is hilarious. Basic foundation of the plot is based on confusion and humor while there is also this special something which won't let the audience get up from their seats. Actually for this kind of genre you need to keep that in mind otherwise the film doesn't work.

What exactly is this 'special something'?

(Smiles) To begin with there are sex jokes which are as per the film's genre. In any case we started it with Kya Kool Hain Hum and now after the success of Delhi Belly, our audience is all the more ready for such humor. There are situations, jokes and misunderstandings that you go through in everyday life; now that they find a place in the film they are indeed adult in nature since we are presenting a sex comedy today. Thankfully our audience has matured and we are in a space where subjects which were once a taboo can now be explored if presented correctly.

In any case, with the core template of the film comprising of adult humor, anything less and the audience would have felt cheated.

Exactly! Moreover it isn't as if we are alien to such jokes; audience does know everything that comes on screen. Of course we may not be comfortable admitting it in public but then we are not averse to it either. Times are changing and we are getting used to such humor now. Haan, pehle humein khud bhi sharam aati thi but today's generation is different and they are more open and honest about expressing their feelings while being able to deal with adult humor.

Talking about adult humor, the presentation appears to be naughtier than shocking, right?

Guess what, to begin with we had toned down the humor but then everybody said that 'Pehle jaisi baat nahin hai isliye thodha sex element badhao'. They also wanted us to add an extra shock value for it to be an apt sequel to Kya Kool Hain Hum. The demand itself shows how things have changed over a period of time.

People have matured too.

I am not advocating that kids should watch it! But yes, teenagers and couples can of course go for it. Probably we have not become so open in our culture that a daughter and father can sit together and watch it but then they could well watch it 'alag alag' in a theatre (chuckles). There is no point watching the film in a hiding. I guess we are becoming much more comfortable with this genre of cinema.

You seem to be sure about critics being uncomfortable.

Well, we are aware that this is not a film that most Indian critics would appreciate! This is a film which is made for that segment of audiences which liked the first in the series and are open to enjoy such humor. What we are bringing on screen is raunchy, mad and slapstick humor; we also understand that not everyone can possibly appreciate it. Or perhaps acknowledge it at least.

There are murmurs though that you brought your decade long experience into play and did lend (director) Sachin (Yardi) quite a few suggestions.

See, he is someone who is open to feedback so at time when you feel that there are certain scenes that you can improve, it is unfair to hold on to suggestions. The good thing is that he does not take things badly. In fact I remember that when dubbing was being done for some of the last scenes, there were certain words that needed a change. I suggested so and he was comfortable with that. More than that there was no need for interference of any kind since we all were on the same page about what was required and how it had to be done.

So have you already appreciated and acknowledged him for his efforts?

Of course yes! In fact during the filming of Devdas scene itself with Neha and Sarah, I walked up to him and told him that we had a huge film in hand. All of us are aware and sure of the enormous potential that this film has.