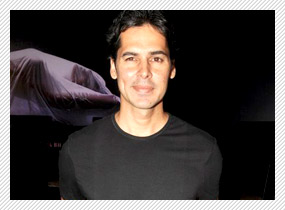 Wellâ€¦It's a mixed feeling. I am on Cloud nine, I am anxious, nervous. It's my first film as a producer so I am going through various emotions at the moment. Of course I am happy knowing that my first film has already created such a stir. And I give all the credit for this to Pooja Bhatt. She has been absolutely brilliant.

Was turning producer always at the back of your mind?

I thought its better to get into the bigger picture and test the waters. Unless I test it, I wouldn't know if it's my cuppa tea. So I tried and luckily things have worked out pretty good so far for my first film. I just hope it continues to remain the same for the rest. The idea is to get into something and sustain it so I am here for the long run and not for a one-off film

Would it be right in saying that Sunny Leone is your film's biggest trump card?

It would be wrong to say that. I am sure people would come in to the theatres to see Sunny Leone but I promise you that when they walk out they'll take away something different and much more than just Sunny.

Coming to Sunny Leone, I believe you were initially quite taken aback when Pooja suggested her name?

Yesâ€¦it's true. In fact I never knew about someone called Sunny Leone at that point. Pooja asked me to Google her and warned me not to be shocked. So I Googled Sunny Leone and needless to say I was shocked. I called Pooja and shyly asked her, "You know she is cute and everything butâ€¦butâ€¦.butâ€¦" Pooja felt that she was the right choice and convinced me and I am glad I went with her belief.

We all know that Sunny is drop-dead gorgeous and has a fab body, but the question is can she act?

Well for that you will have to come and see the film and decide for yourself. This is her first stint in a proper commercial film. She has been very diligent and hardworking and I believe for every newcomer you have to give them some benefit of doubt.

I think our audiences are mature enough for much more. It's just that there are few of us who are lying to themselves and being hypocrites. As clichÃ©d as it may sound, we come from a land of Kamasutra, we've got a population of over a billion. How do you think people are making these kids? So its high time we stop fooling ourselves and thinking of sex as a taboo. Even if you drive past Bandra reclamation, you see couples on their bikes or in their cars indulging in open public display of affection and making out. So who are we trying to fool as a society? One has to accept sex for what it is, and move on. It's human nature at the end of the dayâ€¦nothing to be frowned upon.

How has been the experience handling production?

I learnt a lot during this film. I did everything right from managing accounts to booking hotels to dealing with travel agencies etc. I've got down and dirty into production as I believe that it's the only way you can learn the ropes. This being my first film as a producer, I wanted to be involved in every aspect of the filmmaking process. Prior to this, I didn't know much about rates and costs etc. but now I can say that I have got a fair understanding of how things operate. Here again I have to thank Pooja for encouraging me to actually get down and dirty. I could have easily delegated work to people below but that way I wouldn't have learnt anything. People would have just taken me for a ride with respect to bills, rates, invoices etc. Now that I've been there and done that, I am much more informed.

Be honestâ€¦wasn't there ever a desire to cast yourself opposite a beauty like Sunny?

You guys seem to have relied more on the online medium (internet) for promotionsâ€¦tell us something about that strategy.

Today almost everybody is net-savvy. Maybe some of the masses aren't that net-savvy but they are very much on their mobile most of the time. Everybody downloads content on their mobile or on their computers. So the idea of coming online was because there is no censorship so it gives us the freedom to go ahead and put whatever we want to share with our audience. We've got a tremendous response for each our videos and promos.

Speaking of censorship, you were asked to reduce the length of 4 love-making scenes. Has that been a bit upsetting?

Not reallyâ€¦we haven't toned down anything. We always knew that the Censor Board would have certain issues with respect to some scenes so the scenes were shot in a way that if required they could be cut down in length without affecting the desired impact. However, I must say that it hasn't diluted the impact of the scene in any way and we are happy with the end product.

Finally has Dino the actor taken a backseat?

Not at allâ€¦I am just looking for a nice script. Acting is my first love. When I don't see myself I feel jealous and hate myself, so rest assured I am going to be back soon.