Bollywood actress Nimrat Kaur recently visited Patiala for the inaugural ceremony of her father Late Major Bhupender Singh’s statue in the Patiala regiment. In honour of his contribution to serving his nation and motherland, a bronze statue of Major Bhupender Singh was inaugurated at the Heritage Hall at his parent regiment 64 Assault Engineer Regiment in Patiala. 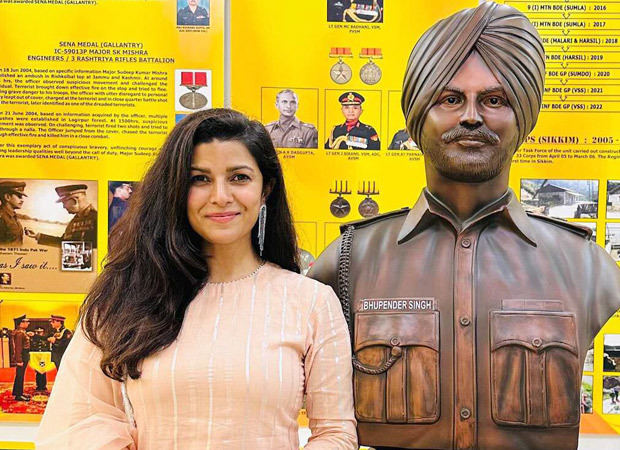 While Nimrat’s father was awarded the Shaurya Chakra posthumously, she informs, “It’s a really special moment for us all to be here to honour his memory and partake in this wonderfully noble and incredible gesture by the Indian Army.”

“Patiala is very close to my heart because I have been in Patiala with my parents in two different tenures that my father had his postings there; when I was a little baby, and incidentally we lived in the same house for both our postings and the second time we were all together as a family as after that we lost him in Kashmir where we couldn’t join him,” assets the actress.

The Airlift actress further adds, “Patiala is also my favourite because I completed my 5th, 6th and 7th standard in a school there and that really laid the foundation where I am today, as extra-curricular activities, dramatics and incredible values were instilled in me as a child.”

On the other hand, the Luv Shuv Tey Chicken Khurana actress took to her verified social media handle and shared some pictures from the event. An excerpt of her caption read, “Ruby and I shall be ever so grateful to our 64 Assault Engineer Regiment family for immortalising the good work and the legacy of Papa’s service to the land and forces on the prestigious occasion of their 49th Raising Day. As Papa would’ve customarily roared from the parade grounds, Agrani Ajay!! Jai Hind.”

On the professional front, the 40-year-old actress was last seen in Dasvi starring Abhishek Bachchan. She will be next seen in Dinesh Vijan’s Happy Teachers Day. The forthcoming film, also starring Radhika Madan, will release on Teacher's Day 2023.

Also Read: Nimrat Kaur gets nostalgic as she visits alma mater in Patiala; calls it her favourite “red carpet”