By now, we all would be aware that Priyanka Chopra is busy with the promotions of Isn’t It Romantic?, which features her in a supporting role with Rebel Wilson in the forthcoming rom-com. Amidst the promotions, the actress has also been giving tidbits about her love story with American songwriter-singer, actor Nick Jonas. And now, the two just made Nickyanka fans go ‘aww’ with their ‘sweeping off their feet’ moment at the premiere of Isn’t It Romantic? in Los Angeles. 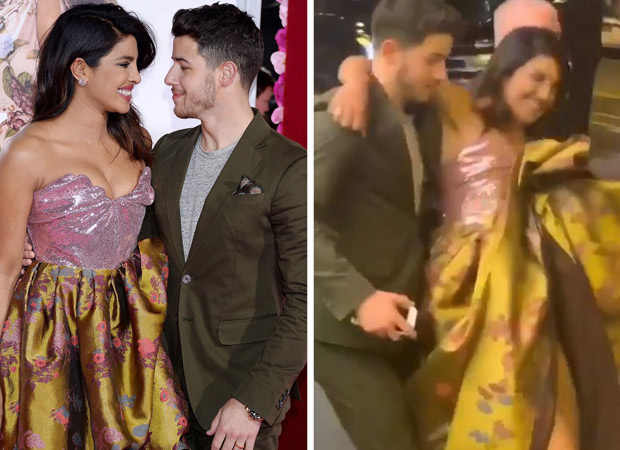 It seems that Priyanka Chopra, who was wearing a long gown at the premiere of Isn’t It Romantic?, almost tripped whilst walking towards the entrance for the premiere of her forthcoming rom-com. However, Nick Jonas was right behind and came to her rescue and the moment of him almost sweeping Priyanka off her feet, quite literally left fans go thrilled.

In fact, the moment was captured by many fans on their respective phones. The said video of Nick coming to the rescue of Priyanka Chopra has gone viral on varied social media platforms. Fans too have been commenting on the same, gushing about the adorable chemistry between the love birds. Interestingly, the couple have been made it to the news in the past too when they kissed during the premiere of the film and the video of the same too started doing the rounds on these platforms.

Aww they’re so cute ???? he carried her over a puddle. #priyankachopra #nickjonas #mrandmrsjonas #nickyanka #couplesgoals

Priyanka Chopra and Nick Jonas tied the knot in Jodhpur in December last year in Christian and Hindu wedding rituals. The couple took off for a honeymoon during Christmas and New Years and explored Caribbean Islands and Switzerland. They also are expected to have some special plans for their first Valentine as a married couple.

Also Read: Priyanka Chopra is a pro at game of flinch, gets shocked after watching a magician’s insane card tricks