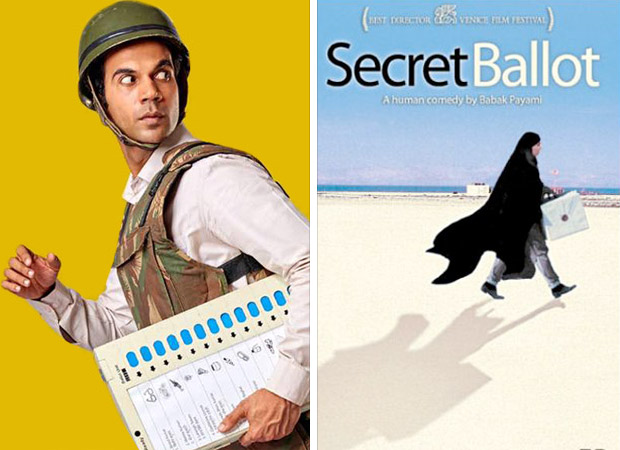 We definitely suffer from ‘crab mentality’ and Bollywood is no exception. Many of the fraternity members fail to deliver a well-made film most of the times but are the forefront in bringing down a film that is creating waves. Sadly, even certain members of the media jump in. The allegations that Newton is a copy of an Iranian film Secret Ballot is a classic case in this regard.

For the uninitiated, Newton is a film starring Rajkummar Rao and directed by Amit Masurkar. It’s about a rookie government clerk who is sent to the Naxal-infested jungles of Chhattisgarh to conduct free and fair elections. How his honesty and quest to perform his duty to perfection lead to hilarious and even shocking consequences forms the rest of the film.

If one talks about the basic premise, then yes, both Secret Ballot and Newton are based on elections being conducted in a remote area. But the similarities end there. The character sketch, the milieu in which both the films are based and the culminations of both films are drastically different. Watch Secret Ballot and not even once will you think of Newton despite the election angle. In short, both films are poles apart. Yet, it’s shocking to see articles claiming that Newton is a ‘copy’ or a ‘rip off’! By that logic, more than half of the films are rip offs. Baahubali 2 had so many similarities with Dharam Veer, the 1977 Dharmendra starrer. But again, the basic idea is the same – rest entirely is different. As Anurag Kashyap said rightfully, “Newton is as much a copy of Secret Ballot as The Avengers is of Watan Ke Rakhwale!”

And let’s not forget that the election season in India is nothing short of a grand event. During every major election, it is not uncommon to find articles on difficulties faced by officers of Election Commission of India to organize polling in certain areas of the country. Not just India, many regions of the world have experienced it. Hence it is nothing short of a burning issue globally and it’s only natural that Amit Masurkar made a film out of it.

In today’s times, it is not difficult for anyone to find out if a film has been plagiarised. One might lift a film made in the most remote part of the world but there would be someone who would have seen that film and will expose on social media websites about the rip off. Five years ago, another Oscar contender, Barfi copied several scenes from films around the world. Within 24 hours of the film’s release, an entire list was out as to which sequence was lifted from which particular film. And this happened way back in 2012. It’s obvious that writer-director Amit Masurkar won’t obviously commit a similar folly.

Also, let’s not forget that Secret Ballot is a popular international film, having toured lot of film festivals. Newton too managed to get screened in festivals like the Berlin Film Festival. But check out the international reviews of Newton and one realizes that NOBODY made even a fleeting reference of Secret Ballot while reviewing Newton. Interestingly, these baseless allegations began only when Newton released in India, on Friday, September 22. And the allegations gathered momentum once it came to light that Newton has gone to the Oscars as India’s official entry. Crab mentality, you see!

Thankfully, the damage isn’t done. Slowly and gradually, people are beginning to understand that Newton and Secret Ballot are as similar as say Gupt and Gone Girl. It’s also been observed that half of the people shouting from the rooftops about the plagiarism charges have not even seen Secret Ballot and few of them haven’t even bothered to check out Newton! This is highly disappointing and it’s high time we stop this stupidity and give genuine films a chance to thrive!