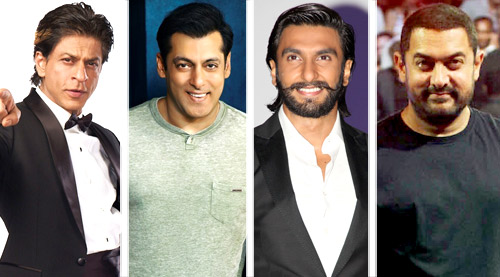 Our favourite Bollywood celebrities kept us entertained both on screen and off throughout 2015. But being their true fans, it's only fair that we suggest them few New Year

resolutions to cut down the mistakes that made this year. So here's our list of New Year resolutions that we feel that some of our favourite celebs should make.

If you too have any recommendations, we request you to post them in the comments section below.

Salman Khan: Stop 'Being Human' towards talentless actors by giving them a break. Also, get married and say goodbye to virginity already!

Ranveer Singh: To try keeping 'maun wrat' for an hour. And share the video on youtube. Treat it as a challenge from us Ranveer Ching.

Aamir Khan: To stop crying after every film, to stop promoting Imran Khan's movies, and most importantly, to stop telling the world about your wife's opinions.

Ranbir Kapoor: To start doing films that the audiences in India will understand. Seriously Ranbir, listen to what dad Rishi Kapoor has been saying about doing commercial films.

Hrithik Roshan: To stop putting pictures of every holiday that he takes with his sons in the media. We know you love your kids more than her Hrithik, we get it.

Ajay Devgn: Never try to dance like Jackson again... ever...

Sidharth Malhotra: To do at least one film that is not produced by Karan Johar.

Parineeti Chopra: Stop trying to be any thinner. It is really looking like a desperate attempt for an image makeover now.

Sunny Leone: To focus back on her movie career rather than running behind TV, Live shows and everything else that loads up the bank account.

Priyanka Chopra: To drop that fake American accent while doing interviews... even in the US. They all know you are from India and you don't speak like that.

Akshay Kumar: To pick serious action films over mindless comedies. The audiences love to see you in good content driven films Akki. And to finally cross the Rs. 100 crore mark at the box

Katrina Kaif: Stop trying so hard to become a Kapoor bahu and sign some good films before it's too late.

Sonam Kapoor: To finally focus on acting rather spending the whole day at the costume department. There's more to movies than featuring on magazine covers Sonam.

Rani Mukherji: To convince Aditya Chopra to finally do a video interview... (on Bollywood Hungama)

Anushka Sharma: To stop being in news as Virat Kohli's secret girlfriend and start doing more films instead. You are not the first ever actress to date a cricketer Anushka.

Karan Johar: To cut down on his celebrity visits and shows, and get some creative juices flowing in Dharma again by imparting his immense knowledge of filmmaking to his creative team. We

want to see the KJo magic on the big screen soon.

Rohit Shetty: To stop flying cars in the air and return to what he does best, making good comedy films. Let's face it Rohit, Golmaal series worked because its comedy and not its