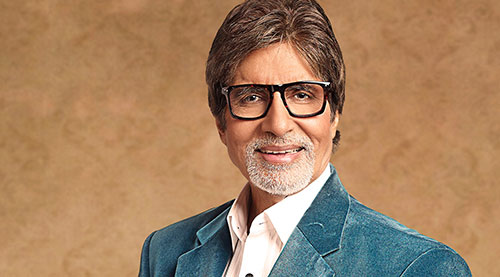 Mr. Amitabh Bachchan is a delight to interview. Not someone who would avoid any question, he brings in the right wit to many of his responses, especially balancing it all well

with the correct intensity that conveys a point loud and clear. With the first big film of 2016, Wazir, round the corner, he gives a detailed account about the film.

There is a definite element of mystery and intrigue that appears to be engulfing Wazir. Were these the very elements that caught your attention towards Wazir?

Yes, the intrigue and the mystery in the film is enticing and quite unique too. That and the fact of its narration made it even more attractive for me.

I am led to believe that Wazir was conceptualized years ago and once it was through with processing, the makers couldn't think beyond you in the pivotal part. Was your reciprocation too

Yes. Wazir was conceptualized years ago and (Vidhu) Vinod (Chopra) shared it with me as well. Now when it was decided to make it, I guess Vinod wanted to stay with the actor he wished to

portray it as well. I had liked what he had in mind several years ago and so when he brought it to fruition I readily agreed.

Time and again when such projects are put together which are close to a filmmaker's heart and pretty much get designated as a 'dream project', the results are at extreme ends. Does that at times

make you a tad wary as at times, too much of thought in a film may prove to be counterproductive as well?

So are you trying to say that films are made generally without 'too much thought' (laughs). No sir, each film is made with a lot of passion and thought and dreams; whether they all fall in place at

the end is the challenge and the hope. I would certainly like to think so.

The film has the game of chess playing an integral part of the film. So how do the mind games take the narrative forward in Wazir?

Life is often referred to as a game of chess - the board, the field of play, the players and the instruments they use to play it - the pawn, the knight, the elephant, the camel, the king and queen

the WAZIR. It is a judicious use and play of these objects and traits that the film wraps itself in. The screenplay and the story idea then takes over and that is what the audience shall see.

In fact purely as a trivia, I am also reminded of Satyajit Ray's Shatranj Ke Khiladi for which you did a voiceover. Now to be actually playing a game of chess in Wazir is a tad surreal,

The very title Wazir pretty much defines that it is an amalgamation of strength and intelligence that would drive the actions of the central protagonist. Is that the beauty of the script

that would be unleashed?

Yes, that and the fact that the smallest and perhaps the most insignificant member on the board, the pawn, has the capacity to be equally powerful because it moves a step at a time, but when it

reaches the end game it has the ability to become a WAZIR!!!

Considering the fact that your presence in the film has to be something special, it can't be expected to be just peripheral and instead has to be the center of the scheme of things. Is that a

That is for you to expect and the audience to find out...

As a matter of fact one does get an impression that while Farhan Akhtar indeed has a great part to play and Neil Nitin Mukesh is the antagonist on screen, your presence is what that would indeed

define Wazir. Is that correct?

In a game of chess it would be silly and not prudent enough to believe, that each 'mohra' does not have its moment of importance. I would expect that from any film, least of all from a film that is

designed around the game.

The film is about a rare friendship between the characters played by Farhan and you in the film. Does this set the stage for a rare 'guru-shishya' interaction on screen that would also lead to

You know, most of your questions are actually answering all the points that any member of the cast interviewed would express (laughs). So my very simple answer to your query would be a very