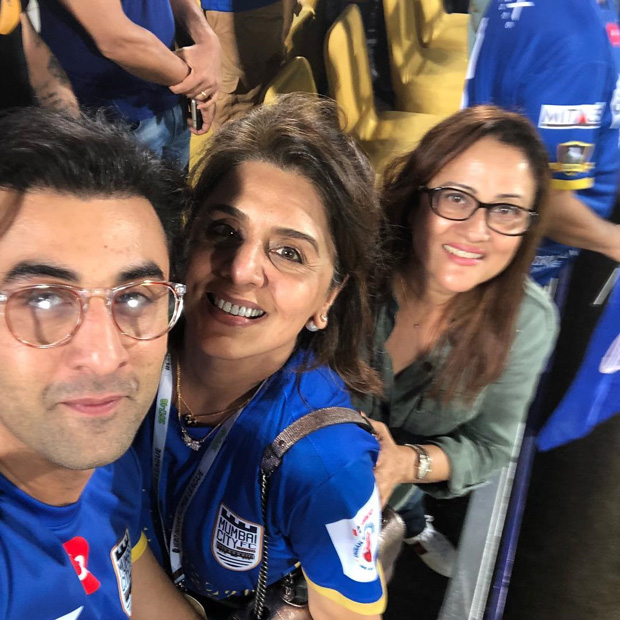 Although the younger generation Kapoors aren’t really present on social media, Rishi Kapoor and Neetu Kapoor are one couple who make their presence felt on these platforms. While the former loves to speak his heart out uninhibitedly, the latter likes to give her fans a sneak peek into the lives of Kapoors. Now, as the ISL fever sets in, Neetu Kapoor came out in support of her son Ranbir Kapoor’s team as she also posted a selfie whilst attending one of the matches.

For the uninitiated, Ranbir Kapoor, who has time and again asserted his love for football, took the game to a different level by turning the co-owner of Mumbai City Football Club that plays at the Indian Super League. Just a day ago, The Islanders, as they are fondly known as, were seen in a match against the Football Club of Goa and furthermore, emerged victorious in the game that was played last night.

Quite obviously, it was an iconic moment not just for the owner Ranbir Kapoor but also the proud mother Neetu Kapoor. The former actress couldn’t resist a selfie with her son during this special time and clicked a picture with him and posted it on her Instagram page. She captioned the same saying, “#theislanders #madeinmumbai #mcfc off to a flying start in Mumbai 2-1 #fcgoaofficial.”

On the work front, Ranbir Kapoor will be gearing up for Sanjay Dutt biopic, directed by Rajkumar Hirani that will be releasing in 2018. The actor will also play the protagonist in best friend Ayan Mukerji’s superhero drama Brahmastra, to be produced by Karan Johar.