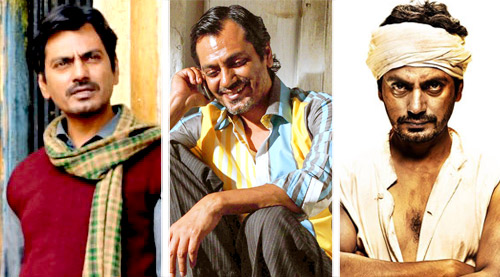 The first time I got to interview Nawazuddin Siddiqui was before the release of Gangs of Wasseypur 2. The stark humility provoked an instant interest in him. He was a total contrast from the tough cop of Kahani or the ferocious Faizal Khan of Gangs Of Wasseypur 2 that the promos had amply proclaimed. He told me that he had come in an auto rickshaw for that interview, and that he still didn't have a house of his own in Mumbai despite having worked in several successful films by then. I was surprised with the response to that interview as it totaled over a million video views and was widely appreciated. A few years later, Nawaz operates out of a nice office in Andheri, owns a plush house and is driven around in posh cars. Now, this is a story that makes Bollywood truly proud of itself.

When one does a postmortem of 2015, we can discuss superstar performances, beautiful actresses making good or bad choices, and directors touching legendary or pauper statuses but what we also need to recognize is the phenomenal consistency of a highly driven man who hides his manic ambition with a lot of effort. Nawazuddin Siddiqui has done nothing wrong in 2015. He was part of three extremely successful films. Successful, not merely in terms of Box Office but also because of how one man changed the game even though he wasn't given due credit.

During the promotions of Badlapur, I interacted with Nawazuddin several times. He was happy to let Varun Dhawan take the lead in promoting what was considered a difficult film to promote. When the film released everyone was blown away by the sheer magic unleashed by Siddiqui. Laik was a highly complex character. There were complicated layers and each layer unraveled itself in an organic non linear fashion. I said it then, I say it now, this performance is worthy of a National Award or any award that's credible.

Salman Khan made Bajrangi Bhaijaan a red hot proposition. Excellent story by K V Vejeyndra Prasad and brilliant direction of Kabir Khan ensured that Bajrangi Bhaijaan became one of the most universally loved films in the recent times. Nawazuddin's performance as the bumbling yet persistent reporter Chand Navaab was universally loved as well. Nawaz was very entertaining, provoking a section of the audience that he overshadowed Salman Khan in some portions. The dialogue where he says that, "Nafrat ko bechna bahut aasaan hota hai, lekin mohabbat..." makes you literally choke with heightened emotions. He surely deserves a National Award for best supporting actor for this portrayal.

The best was saved for the last. Manjhi-The Mountain Man must have been an extremely difficult film to make. Testing conditions in a remote village in Bihar with extreme climate and sparse infrastructure. Nawaz was meant to Become Dashrath Manjhi, a man who over a span of 22 years broke an arrogant mountain with very limited resources against all odds. "Bhagvaan ke bharose mat bethiye, kya pata Bhagvaan hamaare bharose baitha ho," was a powerful dialogue that made me sit up and take notice when the promos started airing. I was totally immersed in the 40 minutes of conversation that we had as our interview before the film. I even accompanied Nawaz and the rest of the team to Gahlur, the village where Dashrath Manjhi actually carried out the massive task. I could feel how passionately in love he was with this character, although like always, he didn't give too much away about his actual feelings. That's the beauty of Nawazuddin Siddiqui; he never lets his emotions flow too profusely. Maybe the fact that he has struggled so much, seen enormous rejections that he doesn't invest too many emotions, as he doesn't want to get hurt if things don't work out the way one wants. Manjhi-The Mountain Man had its share of flaws as a film but one can't take away from the fact that Nawazuddin's performance is worthy of a National Award or as I said before any award that's credible and recognizes genuine talent rather than television requirements.

Here's saluting Nawazuddin Siddiqui for continuing to believe in his gigantic talent and striking a balance between commercial and artistic cinema. No matter how big his films become, we do notice the Art in all of them. I genuinely hope this man continues to follow his heart for he has a lot to offer to the world with his unique brand of Expression.