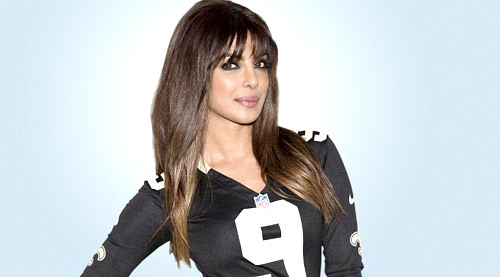 2014 has been a super engaged year for Priyanka Chopra. If she has already seen the release of Mary Kom (which has grossed over 100 crore worldwide), she has all but wrapped up Dil Dhadakne Do. Now she has already started shooting for Sanjay Leela Bhansali's Bajirao Mastani and before the close of year, she would also be hitting the sets for Madhur Bhandarkar's Madamji.

Says Priyanka, "The part I am playing in Zoya's film (Dil Dhadakne Do) is completely opposite to the one I was seen in Mary Kom. Even in Madamji and Bajirao Mastani, there is no similarity whatsoever. While former would go on floors later this year, I have already begun shooting for the latter. Bajirao Mastani is a historical and it requires a lot of preparation from me as I need to really understand the character well."

Even though Dil Dhadakne Do is a multi-starrer with Anushka Sharma alongside her and Bajirao Mastani has Deepika Padukone playing Mastani, Priyanka Chopra is super confident that she has her own place under the sun for both the films.

"When I pick and choose a film, eventually I look for variety. Like when I did Kaminey, I just had eight scenes in that movie but that didn't take away the pride that I felt by while doing that movie," says Priyanka.

While accolades continue to flow in for Mary Kom, the fact remains that each of her next three films is as commercial as it gets with a definite aesthetic element to it, as is expected from Sanjay Lela Bhansali, Madhur Bhandarkar and Zoya Akhtar.

"Of course, my favorite genre of movies is 'masala' blockbusters," smiles Priyanka Chopra, "Take me to see X-Men or Don and I will be the first person to buy the ticket. No work is small work. I am grateful to God that I have the kind of work that I do. I am as proud of songs, dances and celebrations as the fact that I have done a film like Mary Kom."

She does go on to add that performance oriented films do give her a kick of a different kind.

"There is of course a sense of satisfaction that comes when you do a role where you have a lot more to chew on," she adds, "Still, that doesn't take away my gratitude and happiness from big successful blockbuster movies. I love watching them, India likes watching them and there is nothing wrong with that."