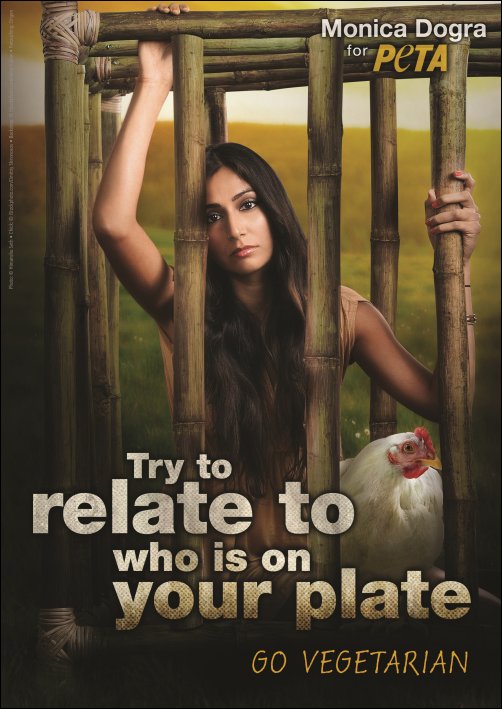 Sitting with a hen inside a rustic cage, Dhobi Ghat star Monica Dogra appears in a brand-new ad for PETA India and urges fans to "try to relate to who is on their plate, go vegetarian". The actor and singer, who went vegetarian after learning what animals killed for meat endure, is now encouraging everyone to switch to a healthy and humane vegetarian diet.

Dogra also sat down for an exclusive video interview with PETA. "I was raised eating meat", she explains. "Around 12 years old, I remember reading ... about factory farming and the way that - particularly chickens at that time - were being treated ... and I remember feeling really harrowed and sad." After she stopped eating animals, Dogra says that her "health improved" and her "weight stabilized".

In addition to starring in Aamir Khan's Dhobi Ghat, Dogra is part of the hot music duo Shaa'ir + Func, which has been named among the top emerging artists and best independent artists by VH1. Originally from Baltimore, Dogra is a graduate of New York University's music program.

Eating meat causes animal suffering on a massive scale. Animals which are killed for food are crammed into vehicles for slaughter in such high numbers that many animals break their bones, suffocate or die en route. At abattoirs, workers often use dull blades to hack at the throats of goats, sheep and other animals. Chickens on factory farms are crowded by the thousands into dark sheds that reek of ammonia from the accumulated waste in which they are forced to stand. These birds never see the light of day and are denied everything that is natural and important to them.

Dogra joins a growing list of celebrities - including Pamela Anderson, Shahid Kapoor, Sir Paul McCartney, R Madhavan and Anil Kumble - who have teamed up with PETA to promote a vegetarian lifestyle.

Kangana Ranaut gets shamed by a fan for…