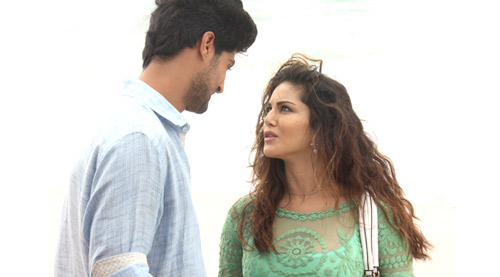 It was a beautiful day wrapped-up in flirtatious rain drops teasing with their naughty pranks and yet serenading the proceedings of the third day of the on location of One Night Stand at the mesmerizingly enchanting Nai Thon Beach in Phuket. Mischievous Sunny Leone ran hand-in-hand with an energetic Tanuj Virwani as the tempestuous waves swept them off their feet and they fell in white-foam-aided waters. A picture-perfect-moment that cinematographer Rakesh Singh gleefully captured on his camera for posterity to savour. As the magic hour gingerly made its presence felt, Sunny and Tanuj drew closer, the sunlight couldn't filter through their locked noses and the silhouette of love appeared as if they were one.

It needs to be noted that the cinematographer has a tough job at hand. The outdoors is the real test for you may have planned to perfection but weather Gods may wash them off whimsically. Rakesh Singh, the debutante cinematographer on One Night Stand is a passionately committed professional. He ensured that all the requisite shots were canned despite the stoppages because of rain. I saw him place the camera on the sand and then very delicately he cleared the leaves and little stones that came in the purview of his camera lens. I have seen some portions from the film and Rakesh has brought in a rich texture through his camera work. It has an international vibe.

Director Jasmine D'souza told me today that writing is the backbone of any movie. "It is a blessing that I have Bhavani Iyer who has written a very nuanced story. Somehow her take on one night stand is different from what one would expect," Jasmine said. Bhavani has written landmark films like Black, Guzaarish and Lootera. Talking about her lead actress, Jasmine said, "One Night Stand is the best performance of Sunny Leone as an actress." When I mentioned about Jasmine's statement to Sunny, she smiled and said, "I have seen a couple of scenes and it was pleasantly surprising how well they have turned out to be. It has very glamorous sensual moments. It's very different. I'm very excited."

It was nice to see Sunny mingle with the crew as she had lunch with them and that too in a very interesting setting. Since the shoot was on the beach, the entire team was camped in an open tent. The food was delicious and the exciting part was that rain drops flew inside the tent making it extremely romantic.

I did walk the talk interviews with Jasmine, Tanuj and Sunny (a brief one, wish it was longer with her) on the beach. The waves teased along as we had a fun time chatting about the film and movies in general. I am especially impressed with Tanuj's simplicity and courteous nature. The credit for that must go to his mom Rati Agnihotri ji who has inculcated good values in him.

During the course of the day I observed the flirtatious sea waves making constant overtures to seduce the demure shore. As the twilight set in, I clasped to one last look of the magical sea beach. A sand castle lay unattended as I walked back. Before the ruthless sea waves rubbished it off, I quickly captured its image in my mobile camera. The night stood tall. A storm of Passion will soon follow.