In November 2022 we had announced the first edition of the Bollywood Hungama Style Icon Awards 2023. Since then we have constantly been updating our readers and the industry as well about the details of the awards that is slated to be held on March 24, 2023. Well, after revealing the date and host, it is time to introduce you to the eminent jury members of the Bollywood Hungama Style Icon Awards 2023.

So here’s a brief look at the jury members who over the years have played a key role in establishing trends or fashion choices for the masses. Bollywood Hungama Style Icon Awards 2023 shall celebrate achievers from diverse walks of life – whether it’s Television, Sports, Business, Fashion, OTT, Culinary World, Regional Cinema and more. The BH Style Icon Awards is curated and directed by Cinema Waale Film and Television Productions LLP & produced by Across Media Solutions. 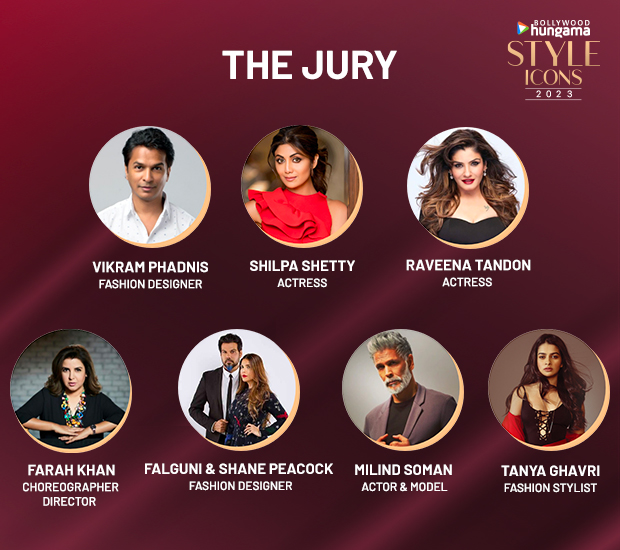 Vikram Phadnis (Fashion Designer)
Coming from a family of doctors, Vikram Phadnis broke the mould with his entry into the world of fashion. Today regarded as one of the most established and successful names in the fashion industry, Vikram is known for his ethnic styles.

Though times have changed, Phadnis’ work continues to keep modernity juxtaposed with the ever-changing sensibilities of fashion alike in his works. Bringing a breath of fresh air with his ethnic designs that reflect Indian culture and modernity his creations have and are still seen in films, on the ramp and are even considered the height of fashion.

With experiences like this, Vikram is the perfect choice to lead the jury for the BH Style Icon Awards 2023.

Shilpa Shetty Kundra (Actor)
Did we know that zero figure existed way before it became a trend in the 2000s. And the persona who is associated with it the most is Shilpa Shetty Kundra. She can be a mother of two but her love for fitness and exercises reflects in the way she has stopped aging from the early 2000s.

Shilpa Shetty Kundra is also a reality show judge and we have seen her experiment in fashion way beyond films. From pant saree to glamorous gowns to even workout clothes, when you have a muse like Mrs. Kundra, the sartorial choices never seem to end. Well what can, we say about the fashionista who rocked a swimsuit in her debut film Baazigar (1993) just like the way she rocked a bikini 15 years later in Dostana (2008)! Even the simplicity of her salwars in Phir Milenge managed to add to her grace onscreen!

Is there a fashion trend that our beloved Mrs. Shetty Kundra can’t rock on and off screen? We doubt!

Raveena Tandon (Actor)
She needs no introduction. All we have to say is ‘Tip Tip Barsa Paani’. The ruffled sleeves blouse, the yellow saree – the memory of her iconic outfits in Mohra is still fresh in the memory of every 90s kid. Raveena Tandon is not just a brilliant award-winning actress but she is also a fashionista.

The long hoops, the high pony, the pretty dresses, the quintessential and traditional salwar suits and the iconic saree – there is hardly any avatar of the actress that we haven’t seen onscreen. Her versatility from being the traditional bharatiya naari and making nose rings a trend to becoming the sensual diva who can pull off the darkest of lip shade with oomph, the effortless switch of Raveena Tandon is what made her the ‘diva’ of Bollywood.

With a massively successful career in Bollywood and now with the immense success of KGF Chapter 2 paving a new path for this actress, Raveena Tandon has continued to maintain her charm with experimentation. And her love for experiments is not just restricted to acting chops but also her fashion avatars!

Farah Khan (Choreographer/ Director)
Whether it is her debut directorial Main Hoon Na or her last one Happy New Year, there is no film of Farah that can be complete without fashion.

How can we forget ‘Chandni’ Sushmita Sen and ‘Shanti Priya’ Deepika Padukone! The chiffon sarees of Sen that leaves Shah Rukh Khan mesmerized on the halls of the college campus or the 70s retro look of Deepika, Farah’s films have made some of these sartorial choices synonymous with those films itself.

While Farah Khan was born in a filmy family itself, her entry into the world of films started as a choreographer. But if we remember correctly, Farah also added that oomph in her dance with the help of some of the most iconic outfits. Do you remember Pooja Bedi’s red dress in Jo Jeeta Wahi Sikander in which she recreated a Marilyn Monroe moment?

So who better than the quirky and straightforward Farah, who can give a rather honest opinion on fashion choices?

Tanya Ghavri (Fashion Stylist)
Born in a family of sports and Bollywood, Tanya Ghavri’s keen passion in fashion, made her choose it as a profession. Although her interest started since her childhood days, her first step towards taking it up as a career was when she took admission in Parsons School of Design in New York and later also pursued a course in SNDT in Mumbai.

Post her education, she worked with some prominent names which include Vogue and Pernia Qureshi at the start of her career. From kicking off her career with styling for films like Aisha, she continued to win hearts with her sense of style and fashion in films like Kick, Baaghi 2 etc. She has also styled Kartik Aaryan and Kriti Sanon in Shehzada.

Being a young stylist, Tanya’s modern perspective blended with bold experimentation, brought forth unconventional choices for stars, especially women which led to many leading Bollywood stars choosing her as the personal stylist too.

Milind Soman (Actor& Model)
Truly known as the heartthrob of the 90s, Milind was every millennial’s teenage crush. In 1995, Alisha Chinai's music video, Made in India, showcased the well-sculpted bare body of this Indian supermodel, there wasn’t a heart that didn’t flutter. All of this, before the six-pack abs became a thing!

During the era of Fashion and modeling in the 90s, Milind Soman was the man of the hour and the cover boy of some of the biggest brands. From dabbling in television shows to music videos to Bollywood films, the obsession over this Indian model was never recreated and he continues to remain in hearts even with his unconventional choice of roles like the one he played in Bajirao Mastani in 2016.

Besides being a model, Milind is also a fitness enthusiast and he continues to make women swoon to his salt-and-pepper avatar even today. We are sure that Soman has a lot more in store for us that we haven’t witnessed yet!

Although they started their career by having over five successful runs at the London Fashion Week and later, making a mark among the best designers in the US, their international fame and acclaim did not keep them away from their love for Indian fashion. Known for their edgy fashion, the couple is known for creating couture that is a perfect mix of western and Indian elements. In fact, being one of the few designers to have used the iconic Taj Mahal to present their Indian fashion collection, the couple presented in India couture which was a beautiful fusion of the traditional and authentic crafts and embroidery of the country as an ode to the eternal Indian culture.

Known as the power couple of the fashion world, Falguni and Shane Peacock continue to lead this world by following their heart and letting their work speak for itself.